Formed in 1975 Colosseum II bore scant relation to their first incarnation. Something of a supergroup original drummer Jon Hiseman eventually hooked up with guitarist Gary Moore and keyboard wizard Don Airey and released three albums inside two years. Their debut album Strange New Flesh was a solid start but the band really hit their stride with Electric Savage and War Dance and took the idea of jazz fusion to a whole new level. Incorporating elements of rock, prog, blues and classical these two albums have been criminally overlooked but seem set for re-evaluation thanks to this loving reissue by BGO Records.

By the time Colosseum II recorded their sophomore album they had dispensed with vocalist Mike Starrs (Moore became singer but he only sang on three of these tracks and, despite his vocal prowess, the tunes benefit for being instrumentals) and replaced bassist Neil Murray with John Mole. Recorded “live” in the studio in only seven days Electric Savage has a jazzy, free form sensibility and you have to admire the band’s chutzpah in releasing such an album at the height of the punk explosion. The complete antithesis to the prevailing three chord bluster it seemed the band, a gang of seasoned musos, were born at the wrong time. Colosseum II was quite a departure for Gary Moore who had cut his teeth with the blues based Skid Row yet he had such a strong signature sound his tone is instantly recognisable on opening track ‘Put It This Way’. His playing encompasses everything from heavy riffs to jazzy solos via a funky backbeat as the band shape shift and lead the listener on a merry dance over five dizzying minutes.

Colosseum II were billed a jazz/rock fusion but there’s also a strong progressive influence that finds the dreamlike ‘Rivers’ bearing a strong resemblance to Moving Waves-era Focus and the following ‘The Scorch’ sharing some of Emerson, Lake & Palmer’s grandiose, Wagnerian vision. However, each of the eight tracks here inhabit a unique sonic space and the sorrowful ‘Lament’ reinterprets a traditional Irish folk tune replete with tolling bells and by the time Colosseum II have bent it out of shape it bears little relation to the original. Things kick up a gear for ‘Desperado’, sounding like The Miles Davis Quintet on amphetamine it’s a rather nice tussle between jazz and rock that finds John Mole’s bowel loosening bass rumble juxtaposed with Don Airey’s ethereal keys. There’s a definite late ‘70s feel (which isn’t a bad thing) which is primarily due to Airey’s Mini Moog and Hammond which tethers the band that era and closer ‘Intergalactic Strut’ could easily have sound-tracked Blake’s 7 or Dr Who.

Only five months separated War Dance from its predecessor but it evidences a band in rapid growth; they’ve found a unique groove and are seeing where it takes them. Having the same line up gives a continuity but overall Colosseum II sound much more confident and if you need proof just listen to stomping opener ‘War Dance’. With a hard hitting, busy style drummer Jon Hiseman is something of a beast behind the kit and his drums are placed prominently in the mix as he dictates direction and the band swing with an undeniable chemistry. Things take a decidedly funky turn on ‘Major Keys’ and those who only know Gary Moore from his rock and bluesy phases will be surprised at how musically deft he is and Colosseum II found him scaling heights of creativity that he’d never reach again. This is a more rounded album than Electric Savage but the sedate ‘Castles’ is a low point that flatlines on an album that otherwise pulsates. The only track with vocals it highlights why this brand of jazz fusion works best instrumentally.

Things get back on track with the uptempo ‘Fighting Talk’ and, on an album that’s constantly shifting gears, it veers into hard rock territory and recalls Golden Earring at their bass driven best. ‘The Inquisition’ is another uptempo rocker that puts all the needles firmly in the red before things get decidedly proggy on the three suite seventh track. From it’s other-worldly openings to it’s climatic conclusion via an insanely catchy motif this suite pulls of the bands various strands together into a cohesive whole. In what was to prove their final album the aptly titled ‘Last Exit’ suggests the band knew they were reaching their expiry date and they conspire to create a rather whimsical finale.

Fans of jazz fusion will find much to admire on these two albums but the complex nature of this music means they’ll convert only the most adventurous souls. However, fans of Airey, Hiseman, Mole and Moore who aren’t familiar with their tenures in Colosseum II will find their heroes acting in new, unfamiliar ways which definitely makes this set an essential purchase. 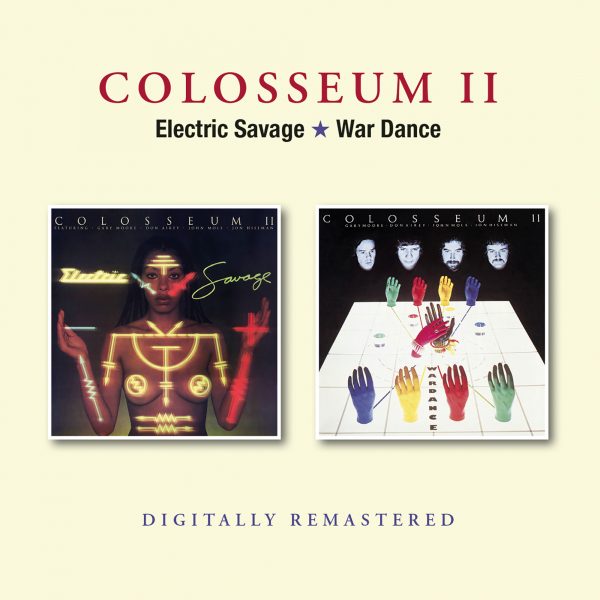