What better way to close the year…

Lionize’s blend of hard rock with reggae, dub and funk may seem an odd choice for this crowd but with their high energy and highly infectious set, they soon win them over. This may, in part, be because they came over with Clutch in 2014 and so some in attendance are already familiar with them, but for those that are new to the band, they are pleasantly surprised. While vocalist/guitarist Nate Bergman chucks out the riffs and fills the room with his mighty melodies, bassist Hank Upton and drummer Chase Lapp drive the grooves and keyboardist Chris Brooks fleshes it out with some tasty work. Playing with enough energy to get the party started and keep it going for the whole evening, with such a driven performance and such a huge response, it might not be too long before we see Lionize back on these shores headlining their own tour.

Crash-landing on Earth in 2000, Valient Thorr “came from Venus to destroy the cities.” With 1500+ gigs to their name and having toured with everyone from Motorhead and Joan Jett to Mastodon, Gogol Bordello, and, of course, Clutch, here they are in the Home of Metal to obliterate it. A complete and completely joyous anomaly, this band has a contagious energy that is as impossible to avoid as it is to comprehend and rock harder than many seen on this – or any other – stage. Overstatement? With denim and leather and sweat and hair and beer and beards and guitars and drums and live-fat-die-drunk humour and a spiritual message of unity for us all, obliterate the second city they do.

It takes just two songs before Valient Himself is bare-chested and bouncing across the boards with all the energy of a coked-up evangelist preaching his message of love and harmony and positive co-existence the masses in red cowboy boots. Flanked by the four Thorrs, this mob pack a brobdingnagian punch, shifting the evening’s energy ever higher in a blast of start-to-finish fun. Charismatic and captivating, as explosive as the MC5, as incendiary as Iggy Pop, and as rocking as they are rolling, delivering this kind of performance with this amount of energy, when Valient Thorr once again crash land on these shores – hopefully soon! – make sure you’re there early.

So then, to Clutch. There are no frills with Clutch. There never have been. I saw Clutch in the early 90s supporting Biohazard at the now-very-dead JBs on King Street and what we got that night was exactly what we got tonight: a band completely unfazed by whatever is in vogue delivering a set list that is as entertaining as it is brimming in authenticity and integrity. Take a listen to all of their releases and you’ll hear the history of rock music itself from the 60s and 70s blues and hard rock of Black Sabbath, ZZ Top, Cream, Hendrix, etc. all the way back to the jazz and blues of the early 20th century. In there, there’s John Lee Hooker, Bo Diddley, Howlin’ Wolf, Chuck Berry and a whole lot more filtered and distilled through Clutch’s own unique voice.

With a set list spanning their 25+ year career, where better to start than with ‘Crucial Velocity’ and ‘Decapitation Blues’? Yep, the mob goes wild. Band and crowd become one. As cool commander-in-chief, Neil Fallon engages captivates the crowd, punctuating the songs and his brilliant and humorous lyrics with his customary celebrant gestures. Guitarist Tim Sult and bassist Dan Maines flank Fallon, holding their stage position as tightly as they do the grooves while drummer Jean-Paul Gaster sits back and drives the songs ever onward, the band coming together within the music they both create and serve. ‘50,000 Unstoppable Watts’ and ‘Pure Rock Fury’ go down a storm as do ‘Noble Savage’ and the soon-to-be-a-classic ‘A Quick Death in Texas ‘. With Lionize’s keyboardist Chris Brooks making an appearance for ‘10001110101’ and ‘Escape From the Prison Planet’, the grooves get deeper and the evening spirals higher. Returning for the encore of ‘Electric Worry’ and ‘X-Ray Visions, Clutch close the year out perfectly. Awesome band, awesome set list, awesome performance. We’ve come to expect no less. 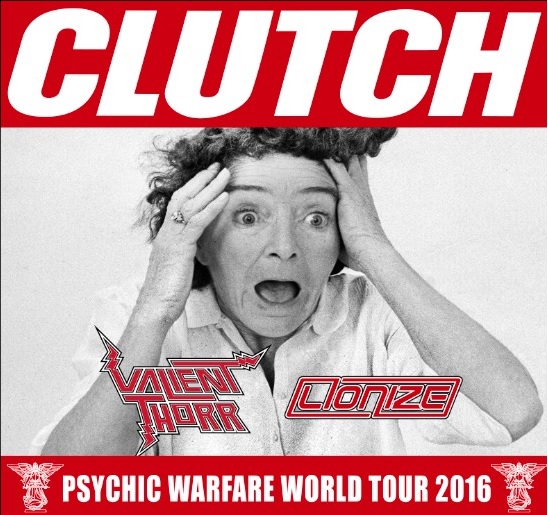