If ever there was an example of a band persevering and creating a niche for themselves in today’s rock and metal circus, then surely Clutch would be top of the list. Almost 25 years since they formed, the former perennial support act are finally getting the accolades they deserve. 2013’s release Earth Rocker is still on heavy rotation around the globe and their 11th studio album, Psychic Warfare is getting everyone in a sweat. So expectations are high for tonight (their gig at Rock City, Nottingham on the Earth Rocker Tour is still in my all time top 5), but first two bands I’ve yet to have seen live.

First up were Greenleaf who, despite being around for nearly 15 years on and off, have never crossed my radar. But this stoner rock group based in Sweden certainly won over many new fans in the audience tonight. The decent sized crowd who had turned up early to catch them were not disappointed; a raucous blend of grimy R’n’R and stoner doom got the heads banging.

Tommi Holappa (guitar) and Bengt Bäcke (bass) are the two remaining original members, with a whole collection of Scandinavian artists joining them over the years.  Arvid Jonsson looks every bit like the archetypal stoner front man, raw and gravelly vocals as dry as the Arizona desert. An excellent start to the evening.

Sticking with the Swedish theme we had the pleasure of Bombus up next. The Gothenburg collective have cultivated a loyal following around Europe since the release of their second album, The Poet and The Parrot. Bombus are loud, the heavy reliance on the huge bass lines and double kick drums creates a vortex of reverb around the auditorium, making the very walls quiver. It’s a good job that the grand old lady that is the Civic Hall/Wulfrun Hall complex is due to close this week for a multi million pound refurbishment, as the very structure of the building was surely compromised!

The pace is relentless as well, and although I’m not a big fan of drum solos in the middle of the set, the long drum intro to the most popular track ‘Enter The Night’ was slick. Their basic heavy metal philosophy reminds me of the early days of Motorhead; straight up, no messing, in your face rock and roll.

And straight up, no bull shit rock and roll is what our main antagonists do better than anyone. Clutch are on the wish list of every promoter at the moment. Riding high after the huge success of Earth Rocker and now the latest album is going the same way, they are selling out venues across the globe. It’s only taken them two decades to get here! It was just a few years ago when they were traipsing around the world supporting that weeks big name, but Fallon and co have huge belief in what they do and have stuck firmly to their guns, finally getting the recognition they deserve.

Clutch know how to write a bloody good song. In fact, the last 2 albums have contained 22 bloody good songs, so picking a tune to open up with and then choosing the rest of the set must be the hardest task of planning their tour. Since Earth Rocker, the title track has been an explosive opener to their sets, and rightly so, but now their is a new opener and it’s, dare I say, even better.  Again it’s the opening track from the new album (forget the intro), and ‘X-Ray Visions’  follows that simple formula of smacking you in the face from the get go, quickly followed by track 2, ‘Firebirds’.

There then followed a master class in how to keep a capacity crowd transfixed and participating as the band performed a set, relying heavily on the last two albums but still time to throw in a couple of crowd favourites, particularly ‘Regulator’, one of those spine tingling moments when the crowd sing every word perfectly. And no need to panic, ‘Earth Rocker’ closed out the set, and with ‘Unto The Breach’ and ‘DC Sound Attack’ wrapping up the encore, this was a set to rival any world class band out there. Better than Rock City 2013? Not quite, but a very close second. 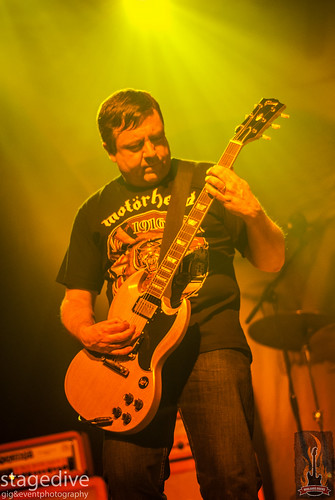