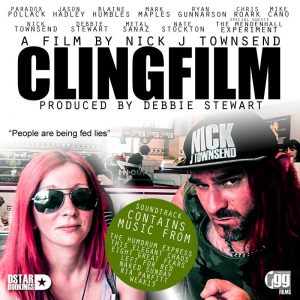 CLINGFILM is a new documentary made by Midlands’s musician Nick J Townsend and his friend Debbie Stewart of D Star Bookings. Some of you may know Nick already, from his work with his midlands based band WEAK13 or from his television work on shows such as ‘Shameless’ and ‘Doctors’.

This is the second instalment of CLINGFILM although it could be classed as the first full feature documentary clocking in at 50 minutes running time. The first instalment was filmed in September 2014 Nick had only been armed with a TV camera 3 weeks prior to this visit, 6 individual interviews were filmed but on returning back to the West Midlands it was decided that these interviews and footage would work better as a documentary.

Wind the clock on a year its 2015, and after much discussion and planning between himself and Debbie it was decided that L.A was going to get a bigger film and try to uncover more than just the glitz and glamour that is forced down your throat on a Hollywood set. This is a documentary that goes beyond the call of duty and is all filmed within a week, picking out the hard work that keeps tinsel town’s lights shining bright.

The name CLINGFILM was decided as the film is transparent and you can see the genuine mistakes in the film, its part of its charm, but it also asks the question of what is real and what isn’t? What has been staged and what hasn’t? Leaving you as the viewer to make up your own mind. It also makes you question other documentaries, wondering what you are being fed via the idiot box.

This documentary details Los Angeles life, focusing on Musicians, Film makers, promoters, stuntmen, comedian’s basically anyone who happens to have a creative flare and wants to achieve their dreams. There are elements of comedy in here that only help highlight the more serious parts of the films, keeping you as the viewer enticed as to what is happening. Some of the camera work is Gonzo, and some reminds me of the great road trip made by the late great Hunter S Thompson and his attorney. Debbie and Nick make a strong duo on this film and it is evident as you look a little closer that there is a great friendship.

There is a lot of camera work and it looks like there has been a great team involved in making this, but when speaking with Nick it becomes apparent that he is the only camera man, putting in the work of 3 or 4 people. Debbie has been responsible as producer and has ensured that great interviews have been set to make this film the success that it is. She also does a fine job at acting and is great at bringing a calming balance to the film.

The duo could have filmed anywhere instead of returning to L.A. I questioned why not New York? London? Paris? Nick explained that they went back to L.A because of contacts that they had established over there previously. L.A is a bigger city than people think and even now they have only scratched the surface. There is something creative about the place, the guy who serves you coffee could be a scriptwriter or a comedian helping to fund his dream.

The idea behind this film is to connect and help people, helping further their careers and highlight the issues people face when chasing their dreams. The soundtrack is a PR machine in itself featuring a host of Midlands bands specifically picked for this outing, Eight Great Fears, Ria Parfit, The Humdrum Express, WEAK13, Left for Red, Naked Sunday and This Elegant Chaos. All bands now directly connected with the L.A scene. The music helps to highlight the story told and brings two worlds together of people that may not have connected. It also sees Midland’s bands getting the exposure they deserve and hopefully encouraging them to make the leap that so many are scared to take.

One of the most inspiring stories in the film is that of The Mendenhall Experiment. For those not in the know, this follows the story of Nate a bass player who has hearing difficulties and Brandon the guitarist with cerebral palsy. This is inspirational in the way that even disabilities should not get in the way of your dreams. If you haven’t heard of The Mendenhall Experiment they are worth your time so watch this film and learn not just the music but their story. Brandon is an ambassador for ‘Daytripper’s’ a UK charity helping those with disabilities, yet another success to this films name. Another cheeky addition is the great interview with Metal Sanaz an L.A promoter that most will be familiar with due to her significant Myspace popularity.

There is the slapstick humour in here too but not all is intentional such as Nick losing his passport (only you Nick). Radio stations were approached, stuntmen from films such as ‘I am Legend’. Yes guys there is more to that film than Will Smith. These are people who make sure they are involved supporting their own dream as well as helping others.

If you want to see this film or learn more the trailer is on YouTube. The Director and producer also have their own hopes and dreams for this film, they would like it screened on local television as well as being screened in Independent cinemas. The duo plan to return to L.A as well as filming a UK edition, with a soundtrack to accompany. Close friendships have been made between here and the states the only thing in the way is a few thousand miles of pond water.

The glitz of Hollywood runs through the canals of the Midlands and maybe too the stars will shine on all involved with a little bit of hard work, networking and supporting each other.