Ok, bear with me, this takes some explanation. Cleaning Women are three, erm, dudes from Finland who play experimental music on instruments hand made from…you may have guessed it (or possibly not), cleaning equipment. So, to wit, we have such instruments as: electric coffee bean can bouzouki, a customised laundry rack, a 3-string closet hangar rod bass, a melodic kling klang and a drum kit made from at least three washing machines!

‘Intersubjectivity’, their first album in 10 years, is produced by Alexander Hacke of Einsturzende Neubauten fame, who was hoping to capture a warm, organic sound. Lead track ‘Playoff’ begins with plinking…as you’d pretty much expect. Then comes an instrument that makes you wonder ‘how can whatever this is not be a guitar?’ And how is this bass not actually a bass? The ensuing riff is perky enough and, considering the backstory, this all sounds relatively conventional. Remarkably non-tricksy, it has a vaguely 80’s post-punk feel to it.

And that vibe pretty much continues for the next few songs. There are clangy bits, mechanical bits, a lot of angular shapes and percussion and vague guitar noises. However, what all of this resolutely is, is not rock! It sounds like early British electronica – Ultravox, Spandau, that kinda deal. Steve Strange in a charity shop warehouse! ‘Shadows In The Air’ fuzzes things up a notch but we still haven’t quite reached the heady heights of Rawwwk.

Then things get odd. ‘Je N’y Crois Pas’ has a spaghetti western twang and husky French vocals. It’s Lynchian…seriously flippin’ Lynchian. Things are beginning to be shaken up. There is a touch of Tom Waits’ later albums to certain songs – choirs, fuzz outs and dusty, metallic xylophones being thoroughly beaten, and there’s definite shades of Marc Ribot to the not-guitars. An ode to homelessness gives us our heaviest moment yet – pots ‘n pans percussion and a scuzzy punk momentum, its musical spasms are pissed off and twitchy.

What next? you ask….well, Krautrock obviously. We march into a two song volley of motoric rhythms, tubular clonks, robotic drone riffs and monotonous German vocals. It’s all uber Teutonic. Those German nihilists in The Big Lebowski…this is how they’d sound if they had to make their own instruments. We finish with some sci-fi trippiness – Dr.Who style melody with wailing Dalek vocals, and why wouldn’t we?

Well, that was interesting. Resolutely and defiantly experimental, it marches to the sound of it’s own washing machine drum. Clearly it’s not going to be to everyone’s tastes and equally clearly, the Cleaning Women aren’t going to give much of a monkeys’! But give it a chance and you might just find that it grows on you…and if not it might help do your laundry.

Released on 15 February 2019 by Svart Records 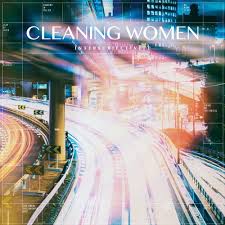