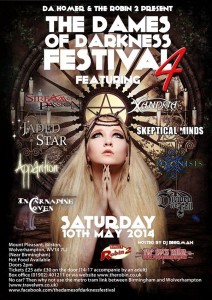 Welcome to Chronicles of Eternal Darkness, our latest round-up of news from the crumbling catacombs of extreme metal. Paul Castles has been delving deep into the decrepit darklands and here’s what he unearthed.

This year’s Dames of Darkness Festival in Bilston may be a few months’ away but the line-up of female fronted metal acts is already looking really hot. Skeptical Minds, Apparition and Incarnadine Coven are already down for the Robin2 on May 10 and among the latest names added to the Black Country bill are Euro symphonic metallers Xandria. The German giants release their sixth album Sacrificium, via Napalm Records, just before their visit to the Black Country. Here’s a taste of what to expect.

Monster Magnet’s latest album Last Patrol has won them a whole new batch of fans, a high number of whom should converge on the Wulfrun on February 14 for one of only two UK shows this year. Dave Wyndorf is the charismatic frontman of the New Jersey outfit who somehow blend the best of garage, prog, metal and punk and come up with something pretty sensational. Arrive in time to catch magnificent support Church of Misery for some devastatingly deep doom from the land of the rising sun. Here’s a track from Last Patrol.

Any fans of the black and the doomy – which should be all of you – are advised to tune into Culted, a mysterious quartet who are said to have never actually been in the same room together and whose roots stretch from Canada to Sweden. They have just released a video of ‘Transmittal’ a track from their Oblique To All Paths album, just out on Relapse. Guitarist Michael Klassen sums it up thus:  “It awakens with a scream to spark a flame and illuminate the world with fire, while scorching the wings of angels to finally reveal the collapse and coldness of space to the listener.” It may sound strange but don’t dismiss Culted before at least taking a look at the official album trailer.

There’s plenty of good stuff coming out of Italy thesedays and one crew worth a look are Cripple Bastards whose debut single ‘Nero In Metastasi’ is out with an album not far behind. Expect something every bit as barbaric and brutal as what passed as entertainment in the coliseum a couple of thousand years ago. Any band with a vocalist called Giulio the Bastard has to be doing something right! The album’s out in the UK next month, via Relapse, and here’s the official trailer.

The doom drums have banging in favour of Indian for a while now. Their last album was very well received so there’s much excitement about their new offering From All Purity. The six-track album, out via Relapse, is a tortured affair that delves into the kind of dark areas of your soul that most people would probably prefer not to know they exist, never mind actually go there. Indian are set to make their first cross-Atlantic trip to perform at Roadburn in April. Take a listen to this stunningly heavy number ‘Directional’ from the Chicago crew’s new album.

Savage Messiah have a date at the Slade Rooms on March 8. The Black Country gig coincides with the release of the melodic metal outfit’s new album The Fateful Dark, via Earache Records. From the Londoners’ forthcoming album take a listen to ‘Minority of One’. Singer Dave Silver said: “Musically, this is my favourite Savage Messiah track ever; we’ve managed to marry the thrash and heavy metal elements into a cohesive track, which is catchy and melodic, but still fast and thrashy.”

Former members of Sonic Syndicate and Dead by April have amalgamated to form The Unguided. They have an album on the way in Fragile Immortality, via  which should please anyone with an ear for melodic death metal. Here’s a preview of what to expect from the Swedes.

Shroud of the Heretic’s debut album Revelations in Alchemy has a March 10 vinyl release now confirmed on Blood Harvest Records. Expect a cavernous rumble of occult death metal from the Portland mob. You can familiarize yourself with the band here.

Steve Tucker, the former Morbid Angel bassist/vocalist is now promising to make his mark with new band Warfather. Orchestrating The Apocalypse is streaming on Greyhaze Records and is traditional old school death metal. The album’s out next month and is well worth a listen.

Final news this month is on a doomladen triple header lined up for Scruffy Murphys in April when Relapse Records’ labelmates Windhand and Inter Arma join forces with local heroes Alunah. Three stunning bands and Trey Dalton, of Richmond, Virginia virtuosos Inter Arma said: “We’ve heard nothing but pretty incredible things about how awesome it can be touring in Europe, and needless to say we’re very ready to experience that for ourselves.” Inter Arma have a new EP on the way but recent album Sky Burial (Relapse Records) should figure prominently at the Brummie hothouse. Here’s a taster.