Reviewed by Brian McGowan and released independently on 30 June 2017

There’s a magical moment in the Simpsons when they are all invited to a party. Homer turns to his wife and kids, and exhorts them to act “like a normal family”. The joke of course being that there’s no such thing. Dysfunction is the norm. And sometimes it’s no laughing matter.

Since youth, musician Christopher Rayson has written and performed with his now estranged twin brother. Christopher says : “The energy from that collapse led to much soul searching and, ultimately, the creation of this album”.

Let’s admit that this album has a built in problem. We are conditioned to think of popular music almost exclusively in terms of boy/girl relationships. It’s much easier to relate to love gone wrong/heartbreak/to have loved and lost. It’s happened to everybody. Even George Clooney.

Rayson goes a long way to overcoming this problem by wearing his heart on his sleeve. Lyrically, the break up is all consuming, he’s almost audibly shedding tears of regret as he churns through the hurt of breaking up (This Don’t Sit Good With Me, It Is What It Is), and accepting that ultimately, this is a broken relationship that just won’t mend (No Big Secret). But when we look for real insights into filial relationships, we don’t get them. It’s a narrative constructed almost entirely from words spoken, promises broken, and the enormity of regret.

Musically, word is that Rayson is heavily influenced by Crowded house, Fleetwood Mac and The Beatles. Clearly then, a man of good taste…there’s a neat Byrdsian jangle and familiar chord structure to ‘No Big Secret’. And the delicate chord work and airy, obsessive lyrics of ‘It’s Been Going On’ might just remind you of The Eagles. Nick Dawes’ crystal clear production and impressive sonic separation helps, giving the music, if not a unique signature, then certainly a striking tone.

Suddenly everything changes with fifth track, ‘Message Taken Not Understood’. A boy meets girl story. What could be simpler. Our previous discomfort and unease vanish. The track’s fuller production, populated by upbeat rhythms and a solid bass thump, heralds a welcome romantic interlude, a proper love song (and a pretty good one) at last.

‘Not Listening’ and ‘Living The Dream’ sing from the same songsheet. They return us to English Eagles territory, propelled by a politer, more refined country rock strum, and the vernacular is more ‘You Told Me To Take A Hike’ than “Standing On A Corner (in Winslow Arizona)”.

To quote a well worn cliché, this is clearly a labour of love. And it’s well noted that Rayson has been assisted by friends and family in realising the recording. It’s a short and bittersweet 27 minute experience. Yet we don’t feel shortchanged. Less is often a hell of a lot more. 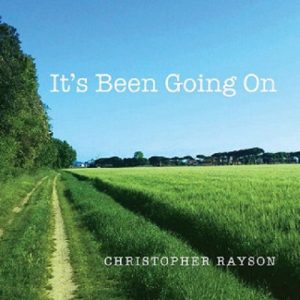