Light at the end of the tunnel…

For once Paul Castles finds himself on board with Chrch, reviewing their sophomore album released by Neurot Recordings on May 11, 2018

On the final day of Desertfest 2018 I managed to weave my way up the winding staircase at the Black Heart in Camden – practically the home of extreme music. On an uncomfortably hot day the heat upstairs was searing but for those present and correct, standing like an army of sweat-dripping Terracotta soldiers, it was all worth it to have their collective minds and pores probed by Chrch (and no, that’s not a typo).

The Americans are one of the most disturbingly creative forces currently expunging doom, that veers between almost undetectable shimmering sounds with full on Beelzebub cries.

Playing tracks from new album Light Will Consume Us All, Chrch were a captivating sight, although to be honest my personal engagement with the band was more aural than visual as squeezing through tight as cement Desertfesters to get a better view was not really an option.

Intrigued by the sheer venom and velocity of what I heard, I vowed to catch up with that album and so here we go. Powerful debut Unanswered Hymns (2015) first turned the spotlight on these Sacramento slowburners.  This follow-up is an absolute stone dead killer which has merely enhanced my frustration that I didn’t quite manage to catch as much of Chrch’s set in London as I had hoped.

The album’s first track is the 20-minute epic ‘Infinite’ which starts with such shallow sounds that even a toddler could transgress their movements without fear of drowning. Purely instrumental for much of the song, it’s an absolutely captivating and charming array of undulating rhythms that gently probe and nudge but while still holding plenty back. The song eventually grows into a more expansive composition helped by the disturbing vocal qualities of Eva Rose which shatter the previously tranquil mood. At times her screeched tones are almost too much to take, as though they were summoned by demonic forces. 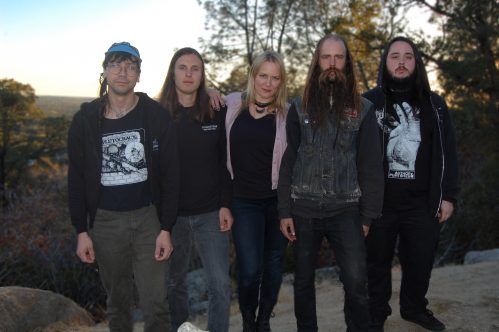 Light Will Consume Us All explores the softest and the most savage sounds, interlocking them when you least expect it to create an album of astonishing power. The monolithic moments challenge your speakers with their low end drones and yet the less foreboding sections envelope you reassuringly.

Make no mistake this is an absolute monster of an album opener, the 20-minute duration spiraling it towards biblical in both sound and stature – although any reference to the Good Book will not necessarily be welcomed by these avowed occultists. The final stages allow Eva more space for expression and she takes this to great effect with her full vocal range confidently bringing light to an otherwise dark journey.

‘Portals’ is a mere 15-minute affair and depressively dark during the early slumbering passages. Eva raises her tone further in, which in turn sees the rumbling rhythms take on a slightly brighter hue. The tempo is steady, with shoegaze levels of monotony which in turn almost pulls you under its dark spell. Last of this tortured triumvirate is ‘Aether’ on which the grooves are slightly more inviting and Eva sings cleanly for long stretches.  There’s an almost desperation around the hollow feel of this track which at times is sustained by the most spartan brushes of guitar strings. But when Chrch rouse themselves they practically take your soul as their furious blackened attacks suddenly overpower you.

You need a pretty strong stomach, and ear, to remain in the pews when Chrch are at their most visceral. Having toured with Fister earlier in the year their next big US jaunt is in support of Yob and the two tour buddies gives you a further insight into the bleak environs that Chrch most commonly inhabit. These days Sunday congregations are seldom full so here’s your chance to help them out by offering praise up for Chrch.