8 years have passed since Chickenfoot‘s less than surefooted dip of the toe into supergroup waters.

A second, much better studio album (2011) and a live album (2012) followed, but it would appear now that poor sales make another recording less than likely.

Undeterred by the fickleness of fans, the band’s European label have bundled the “best tracks” from the two studio albums – plus one new track – along with a CD of live material, recorded when the band toured the debut.

The brand new song, ‘Divine Termination’ is disappointing, and listening to the whole 90 minutes over two discs is a frustrating experience. There’s clearly a great band in there, trying hard to get out. But even the best stuff from the debut sounds half baked in places, not yet fully formed and in fact not certain of what its finished shape should look like. That said, in places, ‘Soap On A Rope’ and ‘Sexy Little Thing’ draw deeply from Hagar’s Van Halen and Montrose past as we see flickering glimpses of striking melodies in among the overlong riffs and homeless rhythmic thumps. But too often the music seems locked down by the shackles of a safety first mentality.

For most, Satriani, liberated from the discipline and convention of instrumental guitar music, was the revelation in Chickenfoot, creating the kind of dynamic with Hagar, Anthony and Smith that most bands only dream of. That said, his freeform jamming style, which often zoned in on an indestructible groove, too frequently tipped over into indulgence. And for many, his solos – postmodern freakouts – became too uncomfortable to truly enjoy.

By album 2, they are clearly more comfortable with each other, they had loosened up. When the strong melodies emerge on this “Best Of…” – three of the stronger songs from that follow up album – the Satriani/Hagar song writing axis clearly wields a hard rock grenade that just keeps exploding, beginning with the stomping ‘Bigfoot’ and ending with ‘Something Going Wrong’, the band’s bruising meditation on Global warming. The strutting, Stonesy ‘Lighten Up’ is sandwiched in between. All sound tough, heavy, but this time songcraft takes precedence over all those amps humming in the room.

The live second disc was recorded during the band’s Phoenix gigs in 2009, thus it consists entirely of live versions of tracks from the debut album. The standouts here – ‘Down The Drain’, ‘Get It Up’ and ‘Turning Left’ all sound and feel like the recording started in the middle of a jam that has already been running smoothly for hours, but even these pale a little when put up against the live (bonus) tracks on Disc One. Energetic covers of Deep Purple’s ‘Highway Star’, The Who’s ‘My Generation’ and Hagar/Montrose’s ‘Bad Motor Scooter’. No band should ever want to compete with these rock music thrill rides. They tell you, if you didn’t already know, just where these four musicians got their influences. It’s all about connecting, and if you can’t do that, forget it. 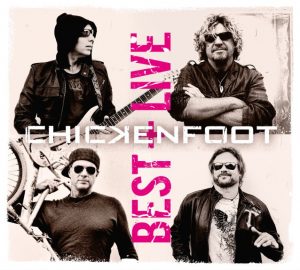