A Wolfe in sheep’s clothing…

Although Hiss Spun has been out for a few months now it would appear remiss to wave goodbye to 2017 to close without posting a review of this exceptional album from enigmatic Chelsea Wolfe. The current crop of underground female vocalists seems exceptional with artists of the calibre of Myrkur, Darkher and Lisa Cuthbert bringing a modern day interpretation to groundbreaking performers such as Nico and Kate Bush. Chelsea did actually collaborate with the Scandi artist Myrkur on a coupl of songs from her widely acclaimed album Mareridt.

While Chelsea Wolfe is already an established singer in her own right her sixth album Hiss Spun does seem to have elevated interest in her work to an even higher level. Hiss Spun is the follow up to 2015 release Abyss, and once more sees the Californian singer dig deep into her soul to expose a diverse range of emotions of which most of us would rather not share quite so transparently with the everyone else.

And while Chelsea is not afraid to explore her own concerns and vulnerabilities the wider world and in particular its many dysfunctional, crooked and cruel factions, also act as a motivational tool to her lucid songwriting. 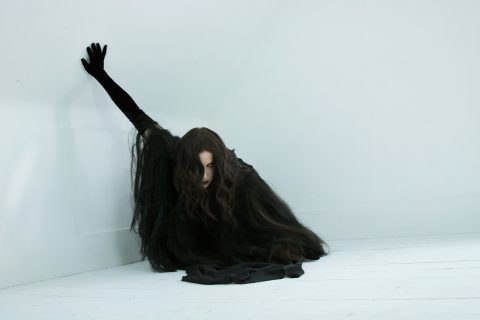 If Hiss Spun dances between shades of light and dark, the explosive entry to opening song ‘Spun’ is firmly at the latter end of the sonic scope, almost a deathly thud kicking the hinges off the doors. But as with so much of her work, Chelsea proceeds to take ‘Spun’ in an unexpected direction, gently weaving a poignant path through undulating grooves with a sultry shadow of a chorus line.

The inspired guitar skills of Troy Van Leeuwen, of Queens of the Stone Age, are to the fore throughout this album which also sees Aaron Turner (Old Man Gloom, SUMAC) share vocals with Chelsea on the song ‘Vex’. On ‘16 Psyche’ there are some even more heartstring tugging moments, not dissimilar from Birmingham’s emerging doom outfit Kroh.

Chelsea’s voice has a magnificent richness to it, at times her crush velvet tones completely overlaying the background shifting psychedelic patterns. Having already cross-ref’d a modern day Birmingham artist, it’s impossible to escape the connection with Toyah Wilcox, and in particular her hit single ‘It’s a Mystery’ on Chelsea’s slow moving ‘The Culling,’ at least until the halfway tempo twist in which a more orchestral accompaniment builds to a grandstand finish.

The album was recorded at God Studios in Salem, Massachusetts, home to the infamous 16th century witch trials. There’s more than just a hint of devilment on Hiss Spun and the sleepy ‘Twin Fawn,’ the album’s longest track, certainly is more than a little bewitching as it switches from light to darkness. Songs such as ‘Static Hum’ and the ethereal ‘Two Spirit’ cement the album as an outstanding offering from start to finish.

Chelsea’s original qualities, which through parentage are as European influenced as her native America, has seen her worked used and showcased by the likes of Game of Thrones and car dealer, Jaguar. The beguiling appeal of Hiss Spun is sure to have even more admirers heading to her door.