A fine piece of rock’n’roll…

The splendid ‘Cheap Trick’, the band’s 1997 “new beginning” album release, was designed to shift the commercial emphasis onto a new generation of rock fans. The critics loved it but the Record Company folded. Lucky White Heather. Every album released since then has had critics and fans willing it to be the “Cheap Trick Comeback Album”. But it took until 2006 for ‘Rockford’ to confound the gainsayers (of whom there were many) and provide the bounty the fans and critics were waiting for. The writing was razor sharp (thanks to the overdue return of Neilsen’s mojo), the production tight, the performances deft and collusive. Clearly, some bitter lessons were learned over many years of unremarkable albums and reliance on outside writers.

On ‘BZCH’, the band’s seventeenth album, Cheap Trick are still full of largesse, lining large pockets of powerpop energy with memorably melodic hooks. Compact, compelling. It may not have ‘Rockford’s strength in depth… the shouty, Lennonesque ‘Do You Believe Me’ juggles a slender tune on Neilsen’s indulgent, down’n’dirty guitar squalls, and ‘Roll Me’ has the unmistakeable whiff of recycled vinyl. But the other nine tracks – from the blue collar rock of frantic opener, ‘Heart On The Line’, to closer, ‘All Strung Out’s Iggy Pop styled shoulder shrug – are full of verve, zest, and head spinning dynamics.

‘No Direction’ is unquestionably the album’s most accessible track, bringing together a naggingly familiar tune and a Magical Mystery Tour middle eight, just to remind us of powerpop’s origins. Built on one of Nielsen’s sublime, down-shifting chord sequences, ‘When I Wake Up Tomorrow’ isn’t far behind. There have been “sounds like Bowie” comments circulating in the music media, but if anything, the track has more of an Icehouse feel, coating the emotion in the message with a layer of sweetness.

Elsewhere, a bright and brassy production lights up ‘Blood Red Kiss’ giving it a contemporary edginess, and a cover of Dobie Gray’s ‘The In Crowd’ arguably takes more from Bryan Ferry’s sophisticated art-rock cover version than from the original’s Motown roots.

The weight of evidence suggests then, ironically, that their last 3 albums, ‘Rockford’, ‘The Latest’ and now, ‘BZCH’ don’t wander far from the blueprint of the original ‘Cheap Trick’ album, the band’s debut, released back in 1977. This may not be the year’s outstanding release, but as fresh testament from one of the world’s most durable, persistent and unnaturally talented rock bands, it’s a fine piece of rock’n’roll. 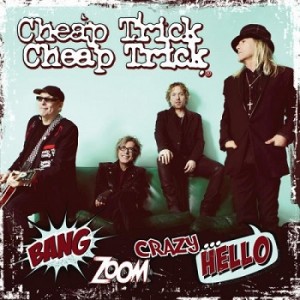