Arguably, Day Trip To Narnia carries with it an almost impossible weight of expectation, the kind of which Cats In Space was less burdened with when Too Many Gods premiered in 2015. That debut’s eventual success led to the even better Scarecrow (2017), cementing the band’s place as one of the UK’s newest Great White Hopes.

This time, mainman Greg Hart has written a bunch of more polished and expensive sounding songs, again in collaboration with 10cc’s Mick Wilson. The band’s note perfect assimilation of second generation power pop, a blueprint used extensively by Jellyfish, Sparks, EnuffZ’Nuff and many other bands is more pastiche than plagiarism or parody. And DTTN is again jampacked with powerful, larger than life images that easily replicate the vital energy of the first two albums, and more.

Readily demonstrating that their grasp is the equal of their reach, the band’s ambition extends to a 27 minute centrepiece, The Story Of Johnny Rocket… in old money, the album’s Side 2. More in a moment.

On Side 1, the recording bursts into life with opener, ‘Narnia’. The track, one of many pocket size polemics peppering the first half of the album, sets the tone, lyrically as well as musically. While the music and the arrangements range through the irrationally catchy yet sturdy pop melodies of ‘She Talks Too Much’ and ‘Tragic Alter Ego’, through the glittering dancefloor cheek to cheek ballad, ‘Silver And Gold’, to the broader AOR rock hues of  ‘Hologram Man’, there’s a thread of razor clawed rhetoric cutting a cynical (and wryly humorous) path through the material. It throws a noose around much of what is wrong in pop music today, but takes aim mainly at shallow celebrity and the artificiality of fame. The approach recalls Terry Thomas’s latter day Charlie albums. Both artists share a talent for iconoclasm and for writing inviting melodies. And that’s where Greg Hart scores. His acerbic observations are matched to powerful poprock productions, filled to overflowing with memorable hooks and big, shiny arrangements. It’s mature, biting, full bodied stuff, with enough philosophising to keep even Noam Chomsky listening for an hour or two.

Side 2 : The Story Of Johnny Rocket

Young Johnny dreams of being an astronaut. This is his story.

You could argue that ‘Johnny Rocket’ (the track) rips off 10cc, during their ‘Rubber Bullets’, ‘Donna’ purple patch, but read any Stewart/Gouldman/Godley/Creme interviews and they are telling you they were rip off merchants themselves (in the nicest possible way, and of course, if you’re gonna steal, steal from the best).

Almost impossibly, these tracks align themselves more closely with pop culture’s illustrious past, full of insanely effortless hooks, tracking the street sound of seventies chart rock,  sweetened by heavenly harmonies that recall the Four Seasons on ‘Thunder In The Night’. Then following the vapour trails of fifties doo wop, lightly layered with ELO’s phased harmonies and descending basslines on ‘One Small Step’ and ‘Twilight’. Yet despite the weightlessness of the music, it all carries a hefty emotional punch, as if dressing Johnny’s moonage daydreams in a parody of fifties and sixties pop somehow makes it urgent and immediate.

It’s not over till it’s over of course. Buried in the moody romanticism and relative sophistication of the balladic ‘Yesterday’s News’ we find echoes of Major Tom, as Johnny takes a dignified look back at his 15 minutes, readily accepting that his exploits have now been consigned to obscurity. Fittingly, the album closes with ‘Destination Unknown’, a very human and heartfelt outburst of optimism that sweeps away what came before, finding comfort in the thought that, well . . . it’s not over till it’s over. 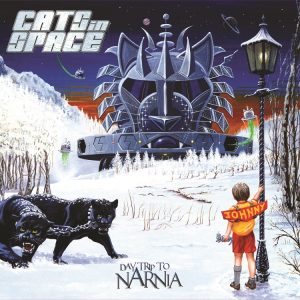