So, Carnifex are back. Die Without Hope is the band’s first album since their hiatus in 2012 and the first on Nuclear blast records. Sonically Carnifex have stuck with their bread and butter. Die Without Hope hasn’t strayed too far from the slightly refined sound the band generated on Hell Chose Me. There’s a subtle blend of black metal accents and thick, heavy deathcore. One thing that is quite refreshing about Carnifex is their apathy towards being labelled Deathcore. While most bands are trying to distinguish themselves away from labels and genres, Carnifex are happy to just do their thing and do it well.

Die Without Hope is packed with groove and beat down laden tracks. If you like blast beats, chugging riffs, gutturals and screams then Die Without Hope is right up your street. The subtle touches of black metal can be found in little symphonic touches and guitar solos. ‘Dark Days’, the second track on the album, is a prime example of how Carnifex employ these black metal nuances.

As with all Carnifex albums, vocalist Scott Lewis provides a macabre poetry in the form of his lyrics. The main themes are loss, heartbreak and deception and death. Although that sounds a bit whiney, Scott Lewis is brilliant at putting these subjects into an almost dark fairy tale-like manner.

While it’s nothing ground breaking, Die without Hope is a solid heavy album, the production is great and there really isn’t anything negative to say about it. Unless you’re not a deathcore fan in which case just turn it off and put something you do like on. Check out ‘Dragged Into The Grave’ and ‘Dark Days’ (above and below this review) for a good taste of what the album is about. 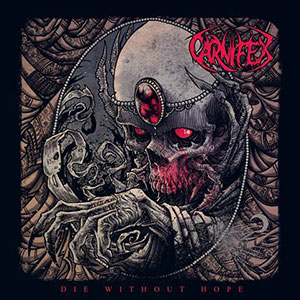