So, Captain Cheesebeard. The name of the band alone tells you that there will be humour involved. And quirkiness. At which point you may have already moved on, it’s not for everyone, I know. Humour in music is one of those things – it either works or it doesn’t. If it doesn’t it can render the music involved almost unlistenable and if it does work, it needs to be in small, focussed doses. Frank Zappa is, perhaps, the prime example – musically brilliant but possessed of a sense of humour that was, to say the least, an acquired taste.

Which leads us fairly neatly onto Captain Cheesebeard. This Brussels based 10-piece started life as a Zappa tribute band before staring to write their own stuff. Their debut, ‘Symphony For Auto-Horns’, came out in 2015 but is now getting a worldwide release courtesy of Mottow Soundz.

To the music. Lead track ‘Avoid The Humanoid’, with it’s corny intergalactic airline announcements, shows that the musical apple hasn’t fallen far from the tree. It’s uber circa 70’s Zappa in it’s rhythms and vocals. The humour is very Zappa-esque, with added touches of ‘Hitchhiker’s’ and ‘Captain Kremmen’. The band lock tight into a poly rhythmical groove, replete with backing singers and horns (which hit a blatant ‘Star Wars’ riff). The keys are funky and bandleader Johan DeConinck drawls about “cruising the intergalactic highway”.

‘Righteousness and Weiners’ (great title) really does sound like a long-lost Frank outtake. It’s fabulously quirky and jazzy and everyone is on the note. There is much talk of virgins but, really, who knows what it’s all about? It’s all very competent but lacks the dirt under Zappa’s fingernails – if you dig my rap, daddio.

Once we get to the title track things start to become…niiiice. The titular symphony does indeed begin with car horns, rapidly followed by wah-wah recreated car horns. We then slide into a cool smooth jazz groove topped by some trademark Zappa guitar explorations. This is very slick modern jazz fusion – jazzoids will be nodding sagely and stroking their goatees in appreciation. There are more guitar heroics and some cool electric piano and vibraphone. It’s all unexpectedly impressive.

Stand out track ‘Tash and a Guitar’ (guess who that’s about?) gets even better. And grittier. The guitar is to the fore in a track that rocks very nicely indeed, even finding time for a nasty rock ‘n roll sax solo! It’s early 80’s Zappa – the Zappa who recruited and duelled very loudly with Steve Vai (ever heard their 1981 Ritz bootleg? Tis quite a thing). Other notable tash wearers (Iommi, Lemmy, Harrison) also get a namecheck.

We also get math fusion, the band consistently turning on several musical dimes, smooth jazz reggae rhythms with chilled out blues guitar and plentiful horns and, to finish, a twisted, skewed ballad with added weirdness, inside out grooves and Joni Mitchell style vocals – a mellow end to a thing of oddness. But mostly in a good way.

If, like me, you are one who likes to occasionally stray from the beaten track, then this could be for you. Be warned, it is definitely an acquired taste but if you’re a Zappa fan, give this a go, you might be pleasantly surprised. You don’t come across many Zappa tribute acts, and with good reason. He’s a singular performer and his stuff is fiendishly complex and difficult to play. But, on this evidence, Captain Cheesebeard have got what it takes – they channel their muse and create something new and fresh. This is way better than a Belgian Zappa tribute band have any right to be.

Released in August by Mottow Soundz 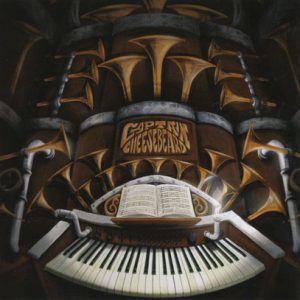