Another slab of demented destruction.

Has anyone got a bad word to say about Cannibal Corpse? If so then they probably need their brain rewiring. What’s not to like with these legendary hardcore sick muthas who have blazed a trail for death metal in its most crushing and scintillating form for a quarter of a century. Cannibal Corpse have managed to navigate their way through the death metal swampland for more than two decades by not only releasing consistently punishing albums, but those dozen albums scarcely feature a poor song among them. If you’re a Corpse fan then you’ll want to add A Skeletal Domain to your collection pretty damn quick.

The album slowly winds itself into action with a nasty high pitched screech as though a feral cat is being dragged across a blackboard with claws extended. Then the chugging bass starts to fuzz on opener ‘High Velocity Impact Spatter’ and before you know it we’re back in familiar Corpse territory. ‘Sadistic Embodiment’ is a burning furnace of a track, red hot, frantic and fevered with George ‘Corpsegrinder’ Fischer grunting the song’s title as though tucking into a plateful of broken glass.

By now we’re really rolling, but even by their own exalted standards ‘Kill or Become’ is eyeball popping stuff. You can almost taste the juices as George demands ‘fire up the chainsaw, hack their fucking heads off’’. With some scorching mid-track riff chaos this is food that any pit will gladly make a meal of. There are some full throttle solos on ‘Headlong into Carnage’ while ‘Funeral Cremation’ has a suitably slower start before breaking off into another wrecking ball track.

While it’s understandable that the eye and the ear is drawn to the Corpsegrinder, Cannibal Corpse are no one-man band and the savage lyrics emanating from the depraved pen of drummer Paul Mazurkiewicz are as blood splattered as ever. Cannibal Corpse will slow it down when necessary and ‘Icepick Lobotomy’ grinds its way into your consciousness rather than merely detonating it in one foul swoop. Alex Webster’s basslines are constant drivers firing up more sparks than a Formula 1 car on the starting grid.

A Skeletal Domain sees a change of producer for Cannibal Corpse although that in no way reflects on the quality work carried out previously under the gaze of Erik Rutan. Sometimes a change just helps to freshen things up and the input of Mark Lewis ­– who has worked on recent material for DevilDriver, Whitechapel and Deicide – has certainly ensured the sound stays as tight and twisted as ever. It does feature more solos than maybe we’ve been used to in the past but it all fits together seamlessly, finally coming to a shuddering halt with the rampant ‘Hollowed Bodies’,another slab of demented destruction that pummels its way along like an unstoppable All Blacks scrum.

Cannibal Corpse will be performing at Damnation at Leeds University on November 1 – with just one London date so far booked on top of that. If you can’t make either of those shows then Midlands fans may have to wait until the New Year to sample the full impact of A Skeletal Domain live. 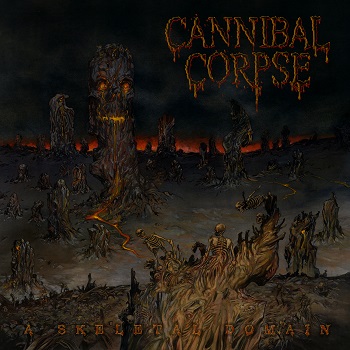