Surely the brightest unearthed jewel in the annuls of British progressive rock were Byzantium. Existing somewhere between Gentle Giant and Pink Floyd their stellar discography has been overlooked (and criminally out of print) for aeons but that anomaly has been rectified with this lavish box, Halfway Dreaming: Anthology 1969-75. Compiled with the assistance of the band it’s sure to raise Byzantium into the realms of prog rock royalty.

Byzantium actually began life under the name Ora at the tail end of the ‘60s. A debut album titled Ora was recorded during gaps in their college timetable and released via Tangerine Records in 1969. With many tracks appearing in demo form Ora was something of rushed (and litigious) release yet that in no way diminishes its persuasive charm. Like The Zombies’ Odessey and Oracle Ora produced a quintessentially English album; whimsical, forlorn and wrapped in autumnal hues. Opening with a slightly folky refrain ‘Seashore’ could quite easily have come from the pen of Syd Barrett and sets a quirky tone that reverberates throughout.

Belying its monochrome sleeve Ora is an album that’s constantly shapeshifting and finding new forms. That’s partly a young band trying to find their signature sound but Ora’s very eclecticism is its unifying force. From the jazz infused ‘About You’ to the proto-metal of ‘Whitch’ to the psychedelic ‘Fly’ Ora weaves a rich tapestry that’s stitched with a certain melancholic melodiousness. ‘The Seagull And The Sailor’ brought Ora to sombre conclusion but this issue adds a further 10 bonus cuts of which an organ heavy ‘What Is Happening’ and an extended, alternative version of ‘Seashore’ are highlights.

Following the dissolution of Ora a few line-up changes saw the formation of Byzantium in 1971. A year later the scored a major label deal with A&M who released Byzantium that same year. It’s far removed from the understated nature of Ora and finds the band bolder and punchier. The angular funk of ‘What Is Happening’ finds the band staring the world straight in the face and absorbing a plethora of influences. ‘I Am A Stranger To My Life’ finds the band in Gentle Giant mode with a neat jazzy midsection and a lush production that’s layered with strings. Well-crafted and exquisitely executed ‘Baby I Can Hear You Calling Me’ shimmers and melds West Coast rock to English prog.

Overall Byzantium sounds an admixture of Shocking Blue, Uriah Heep and Wishbone Ash which is no bad thing but it does lack the atmospherics of Ora. The 10-minute suite ‘Why Or Maybe It’s Because’ is the epic closer and it is here that the band really come into their own by fusing disparate sounds into a cohesive whole with some studio wizardry that could rival latter day Beatles. Three contemporary bonus tracks round out the disc in the shape of well-produced demos and their wistful nature recalls the Ora album.

I’ve always thought of Byzantium as a sponge (in the nicest possible way) soaking up the sounds surrounding them and incorporating them into their own inimitable modus operandi. While recording Seasons Changing the band were on the road with Status Quo and that influence is apparent on the twin guitar lines of ‘What A Coincidence’. However, Byzantium were never going to be easily pigeonholed and the following ‘My Season’s Changing With The Sun’ swings with a Latino beat while ‘Show Me The Way’ set the template for what became known as the power ballad.

Seasons Changing is a pretty apt title and finds Byzantium in chameleon mode but whereas Byzantium sounded a tad disjointed this effort hangs together effortlessly. It sounds like they’ve finally found their niche with both ‘I’ll Always Be Your Friend’ and ‘October Andy’ riding a good groove. Once again it’s the epic closer with which Byzantium blossom and spread their wings over 20 glorious minutes. Split into three distinct sections ‘Something You Said’ is a thing of beauty that recalls the analogue age when you could totally immerse yourself in music.

Having lost their record contract Byzantium carried on stoically and pressed 100 copies of Live/Studio as a calling card to secure gigs and label interest. Arguably their strongest album to date it showcased the bands prowess in both environments to great effect. The studio tracks show a greater focus and urgency with ‘If You Wanna Be My Girl’ and ‘Move With My Time’ displaying a distinctly country vibe while the ‘Live’ side evidences a talented bunch of musicians plying their trade with an envious virtuosity.

Unfortunately, Live/Studio never scored Byzantium another contract but it wasn’t the end of the story. Atlantic Records commissioned a session and the four tracks are presented here as bonus cuts. Moving away from their progressive roots towards a more melodic rock sound they failed to capture Atlantic’s interest and sadly Byzantium folded a month later. That was a shame because these four songs signpost several destinations from the Wings-inflected ‘It Could Be Better’ to the rock action of ‘You Made Me Stand Up Straighter’.

Sans record label but armed with a Midas PA Byzantium travelled the length and breadth of Britain (along with forays into Europe) and documented the era with some fine recordings. Collected here as High Time this 10-track live album was recorded over a period of 12 months and finds Byzantium (now expanded to a five piece) in fine fettle. As the final disc in this set High Time is testament to how far Byzantium travelled musically in just a few short years. Recorded in rather rudimentary circumstances (all these tracks are PA mixes) yet the band shine forth like a diamond in the rough

Opening with the bluesy refrain of ‘Gypsy Man’ Byzantium’s musicianship really shines through and these cuts could quite easily be alternative studio versions. Sequenced like an actual live set a chiming version of ‘Everyday’s The Same’ follows along with the mean and (slightly) moody ‘High Time’. All the bands essential ingredients are present from the close vocal harmonies to the playful guitar lines which makes High Time an enjoyable listen and ‘A Day Like This’ not only makes a fine set closer but the perfect way to conclude this box set. 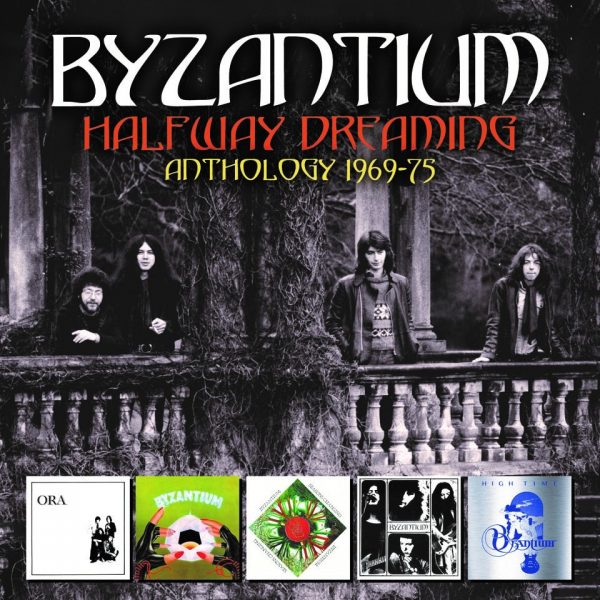