The Bulletboys almost missed the Sunset Strip party but with bands like Motley Crue and Poison releasing seminal albums Girls, Girls, Girls and Open Up And Say… Ahh! in 1987 and ‘88 respectively the timing couldn’t have been better for Marq Torien (vocals), Mike Sweda (guitar), Lonnie Vencent (bass) and Jimmy D’Anda (drums) to come together and hit The Strip with their good time party noise. Torien, Sweda and Vencent had played together in Carmine Appice’s King Kobra so had a solid base from which to form their new outfit. This line-up stayed in place to record the three albums covered within this latest set and amazingly is the line-up which is back together today.

Released the same month as Bon Jovi’s New Jersey and just before Ratt’s platinum selling Reach For The Sky, Bulletboys, the bands debut album, found itself in great company and fitted like a glove within the rock charts at the time. ‘Hard As A Rock’ tells it like it is with D’Anda smashing out the beat and Totien’s banshee call making a mark from the outset. First single ‘Smooth Up In Ya’ is a typical (for the time) sex n’ rock ‘n roll party tune custom made for the MTV generation with the video ranked at #10 in Classic Rocks “Top 10 Best Hair Metal Videos” in 2016. Showing they could glam it up with the best of them ‘Owed To Joe’ tries to out Poison Poison with it’s whistles and “J-J-J-J-Joe” & “B-B-B-B-B-Baby” lines. Short but so sweet. ‘Shoot The Preacher Down’ shows a little of what was to come on Freakshow putting Van Halen through a photocopier, a trick which the band and producer Ted Templeman (who also produced VH) would use to great effect on the follow up. Second single and O’Jays cover ‘For The Love Of Money’ shows that they are fully capable of great things taking this tune and giving it a full on Bulletboys make-over. Back to The Strip for ‘Kissin’ Kitty’ and ‘Hell On My Heels’ both showing Mike Sweda’s quality soloing despite each track being very different in tempo. Galloping on with ‘Crack Me Up’ before ‘Bandlands’ supplies the bands most mature sounding tune of this debut collection before ‘F#9’ concludes in true sleazy style as the band asks “I got some toys you might wanna try?” which proves they are, as stated, “Selling pleasure by the pound”. On this new set the first two albums get a bonus track and here we get an edited version of ‘For The Love Of Money’ to round things off. Of the three CD’s here this is the disc which shows the true Bulletboys. No power ballads just 100% hair metal overload.

With contemporaries such as Skid Row (Slave To The Grind) and Britney Fox (Bite Down Hard) hitting their stride with a heavier sound by 1991 Bulletboys found themselves chasing their tails to find a sound to fit the times on second album Freakshow. With Ted Templeman back on board the band’s sound started to slip into Van Halen territory on tracks like opener ‘Hell Yeah!’, ‘Do Me Raw’, ‘O Me O My’ and the title track ‘Freakshow’ with their twiddly guitar style and vocal harmonies mimicking those of the Dave Lee Roth era band (by ’91 Van Halen had Sammy Hagar on vocal duties). There is still plenty of more original sounding cuts here with The Boys showing their bluesy side on Tom Waits cover ‘Hang On St. Christopher’ and even more so on ‘Talk To Your Daughter’ another cover this time of a 1950’s track by bluesman J.B. Lenoir with it’s ZZ Top shuffle. The two covers were both issued as singles along with first single ‘THC Groove’ which has more in common with the first album with Torien’s Jizzy Pearl style screams. The album also has plenty of quality hair metal on board with the anthemic choruses of ‘Thrill That Kills’ and ‘Say Your Prayer’ along with the chunky riffs of ‘Goodgirl’ and ‘Ripping Me’. As with the previous album they have left their most mature work until the end with an absolute killer track which is ‘Huge’ by name and huge by nature. On this reissue we also get a bonus version of the classic Montrose track ‘Rock Candy’ recorded for the Wayne’s World Soundtrack. Freakshow was a valiant effort but with the likes of Pearl Jam’s Ten, Soundgarden’s Badmotorfinger and Nirvana’s Nevermind all hitting the stores the times they were a changing.

By 1993 the grunge scene was in full flight laying waste to the hair metal scene, so by the time the band released Za-Za they seemed to be throwing everything at the wall to see what stuck. ‘When Pigs Fly’ starts things off on a metallic note before the more typically sleazy ‘Slow And Easy’ gives way to a short industrial burst on ‘The Rising’. With it’s ‘Paradise City’ undertones ‘Sing A Song’ shows the band’s lighter side before they turn all AOR on the Journey tinged ‘Mine’. Back up to speed for ‘1-800-Goodbye’ and ‘The Show’ which find The Boys back on more familiar ground with premium rate sex lines and rock ‘n roll shows dominating proceedings ahead of the more acoustic rhythms of ‘For The Damned’. ‘Laughing With The Dead’ has a more commercial sound before Freakshow‘s Van Halen influence returns on ‘Fess’… well Templeman was still in the production chair. Closing out in true hair metal style with ‘Crosstop’ with it’s opening line of “I know a girl who wants to get laid tonight” just like we’re back in the 80’s. Not very PC but what a bunch of lads!

Bulletboys, Ted Templeman and Warner parted company after these three albums and the Bulletboys bounced between various small labels and independent releases but despite various splits over the years they remain active today. They found themselves a new home at Frontier Records for the release of their last album From Out Of The Skies in 2018 and with the reunion of the original line-up in December 2019 at the Whiskey A Go-Go in Los Angeles there is life in the old dog yet. For lovers of 80’s sleaze in the vein of Motley Crue and Love/Hate.

4. Shoot The Preacher Down

5. For The Love Of Money

5. Talk To Your Daughter

9. Laughing With The Dead 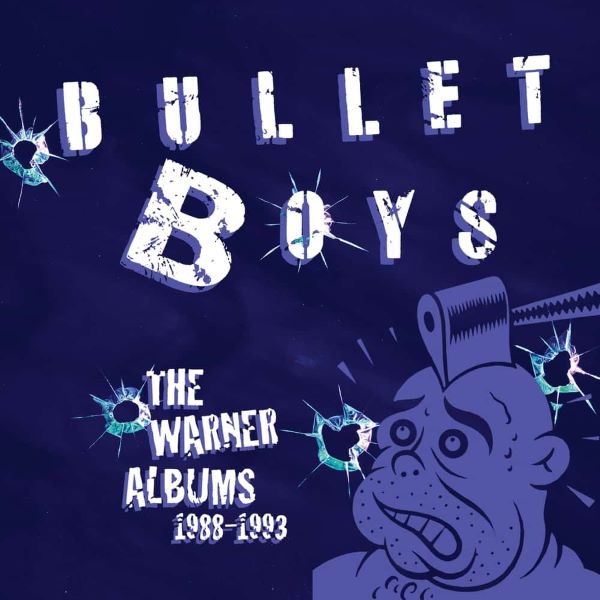