An exhilarating ride from beginning to end

We could spend time here talking about the Bullet Boys‘ past… the eighties, Sunset strip, Glam/sleaze rock and a revolving door labelled “band members this way” caught in a perpetual spin. And for a few moments, we will. The band always sounded like they were aiming for something else, just out of reach, just out of sight. Something darker perhaps. Especially on their second and third albums, Freakshow and Zaza, Both were fatally flawed by a confusion of direction, spread across 2×40 minutes of rock music. Leader/ vocalist/ songwriter, Marq Torien had restlessness in his songs. Not everybody felt comfortable buying in to that and the albums’ producer Ted Templeman didn’t get it. But more than a quarter of a century later, it feels just right. Ace producer Matt Thorne makes it so.

Openers ‘Rollover’ and ‘Tsunami’ sound just like they suggest… filled with raucous, pitch black riffs, dense vocal blasts and heavy duty drums. You can almost hear the mixing desk groaning as it struggles to contain the enormity of momentum created by these opening tracks. And ultimately it’s songwriter Torien’s tightly stitched melodic thread that holds the whole damn thing together. These two tracks are statements of intent. Post Post-grunge rock music that alternately takes a blowtorch and a razor to contemporary melodic rock, contrarily filling tiny gaps in Torien’s and Thorne’s musical minefield with moments of slow moving melodic beauty.

The lyrics too have matured. Where once Torien offered to “Smooth Up In Ya” or expressed a preference that you “Do Me Raw” now his MO has gained a level of subtlety, as in one of the album’s many standout tracks, ‘The Villain’ – “you need sexual healing, let me be your man”. It’s neatly topped off with a fantastic falsetto chorus that picks its way carefully around stinging, biting axework. ‘Kin Folk’ crosses a cultural boundary and sneaks into a steamy, grits’n’catfish confessional. An eighties’ sunset strip convert emerges, humanised, wearing a saintly heart on his sleeve. It’s a glorious piece of southern influenced contemporary rock, drifting along on a melancholy undertow, then climaxing with the nearest thing an ex sleaze rock band ever got to a gospel choir.

That said, the next 3 tracks are the real focal point on the album, pivotal moments that define Torien’s comeback. The first, ‘Saving You From Me’ shambles in on a dirtied up hangover of a riff, puts its arm ’round your shoulders then launches into a soaring, cleansing, cloud clearing chorus. ‘As Dumb As’ brings a poetic, self-deprecatory perspective to starry eyed ambition, with all the frayed grandeur of a faded eighties power ballad. Third in the album’s central trilogy, the frenetic ‘Superhuman Girl’, might remind you of the Backyard Babies’ brand of rock, where heaviness and hooks coexist in explosive perfection… here extolling the doubtful virtues of “power, sex and money”. But in truth, Elefante is an exhilarating ride from beginning to end, even a cover of Elton John’s ‘The Bitch Is Back’ fails to derail this latent comeback. Where other resurgent bands seem hermetically sealed inside the eighties, The BulletBoys are clearly living in the here and now. Album of the year, so far. 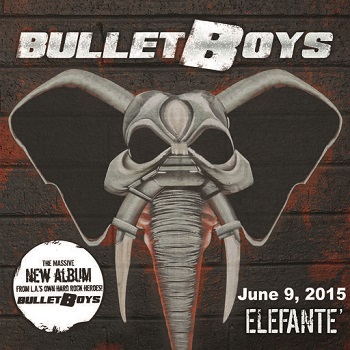