In any overview of Welsh rock band Budgie they are departmentalised into three main categories: the original trio of Burke Shelley, Tony Bourge and Ray Phillips on vocals/bass, guitar and drums respectively that concluded after Never Turn Your Back On A Friend, their next batch of recordings, and then when Birmingham’s own John Thomas joined on guitar. Resoundingly it’s the first three albums that are noted as the seminal ones, such verbiage repeated endlessly as lazy journalism without considering the facts. The MCA Albums 1973-1975 Box Set offers an opportunity to study the historical evidence on record from a new perspective, for it begins with the climax of their somewhat mythical Golden Age through to the period where they actually achieved wider success. That each album in this collection features a different drummer may be part of the reason, but how so might have more to do with personality conflicts than playing compatibility.

Budgie had a penchant for weird song titles, sung by a high-pitched nasally-inflected hepcat whose kinkily surreal beatnik jive sounded cool but more often bamboozled those trying to find hidden meaning. Never Turn Your Back On A Friend then is reverse psychology at play opening with a riff of shrilling intensity that threatens to destroy all in its path. ‘Breadfan’ remains their calling card, “bread” being slang for money back in the day and while it’s mainly about them being ripped off, there’s intimation that they’re admired for doing it so blatantly. Musically, the rhythm section veer between punctuating and joining Bourge’s unrelenting guitar only to change course and boogie hard, sludge and slouch for a bar or two, then suddenly shift into an angelic acoustic interlude before hammering it all home again with that riff.

‘Baby, Please Don’t Go’ is a heavy cover of the Them hit-song. It tends towards the pedestrian sound most critics laid at Budgie’s perch, but you can feel a greater sense of separation on this re-mastered cut, though die-hard fans might claim that muffled distortion prevalent on their earliest works is what turned them onto the band in the first place. Tossing in breezy acoustic second cousins to The Beatles’ ‘Norwegian Wood’ was something the band liked to do too, and here it comes in the form of ‘You Know I’ll Always Love You’ preceding ‘You’re The Biggest Thing Since Powdered Milk’ where they ladle it on thick as phased drum solo becomes shuffling metal blues rock and distorted guitar sorties writhe over a constantly shifting octave bass line only for a hard-fuzzed riff to swoop in and attack, Shelley’s shrieking replaced by what could be Phillips’ voice and pre-empting Bon Scott by singing about a woman who’s “Twenty feet tall”. The riff bludgeons like a fairground’s sledgehammer testing your strength and only gives out as the arm on the record player on the original vinyl Side One reaches its limit.

Even if you’re playing this box set on CD or digitally you need to use real speakers echoing out to get the full impact of the thrash oompah that is ‘In The Grip Of A Tyrefitter’s Hand’ before the band again change direction and boogie, Bourge goes off at a tangent playing an alternative take on Love Sculpture’s ‘Sabre Dance’ then a piercing solo with weighty note bends as Burke fidgets on the bass and Phillips’ hi-hat keeps things it tight. The acoustic ‘Riding My Nightmare’ glides along long enough to take a toke, but it’s ‘Parents’ that you want to hear. Bourge pulls out mournful wracked-in-pain blues licks that subside as an acoustic and more melodic electric come to the fore, Philips’ drums a little jazzy working with Shelley’s bobbing bass as he sings a cautionary tale about growing up. Emotive it builds, Bourge hitting fluid grace notes and flamenco asides around the main theme; poignant with overdubs galore, a bottleneck imitating a flock of seagulls in a scene from Hitchcock’s The Birds, overall, as it fades, the overall emotion is one of great sadness. For fans of the original line-up that made sense because Phillips was out. Pushed? Had enough? Never quite sure. But what it also did was draw an end to the last vestiges of any Cream acid-blues power-trio similarities.

From the moment In For The Kill’s title track starts you know it’s a different ballgame. The bottleneck effects that concluded ‘Parents’ replaced sharply by a  sustained note from Bourge that challenges Iommi’s Messenger of Doom role. He pulls a curdling cluster of notes around it and the rhythm section dive in to follow Bourge’s leads on the distorted signature riff, new drummer Pete Boot announcing his presence with a cowbell and totally different rhythmic swing to Phillips. In the vocal department, Shelley reconsiders the oligarch commentary of ‘Breadfan’ one minute, acts like a potential messiah the next, then comes on like an upbeat hippy during the boogie-fried choruses. But, overall, if on the former albums thrash, doom and the odd stoner fan wants to find its musical roots here we have the heavy metal of its day of which we on the British Isles became the undisputed masters of all we surveyed.

Often considered a holdover from the previous line-up ‘Crash Course In Brain Surgery’ is an unrepentant numbskullingly singular riff, but listening to how the drumming swings sets it in a new light. Maybe the band were on different drugs by now for this season’s acoustic track ‘Wondering What Everyone Knows’ isn’t a hippy-dippy love-ditty but concerns paranoia. Self-assuredness comes back in the form of ‘Zoom Club’ with slow empowering chords punctuated by handclaps and a triangle adds (both imperative, trust me), the guitar then gets funky, tension builds, the band come in grooving, a solo distorted guitar presses and pushes with ever more effects-laden guitar fills and the rhythm section make out like a cross between Slade and Trapeze (well, Boot was from their neck of the woods) for this crazy Bash Street Kids anthemic rock.

Forget Hammer of the Gods, on ‘Hammer And Tongs’ they take on Zep’s ‘Dazed & Confused’ with gusto for a slow driven nihilistic ride, Bourge hammering-on notes hard, Boot virtually mugging his drum kit down a dark alley. Whereas ‘Running From My Soul’ mutates Freddy King’s ‘Hideaway’ instrumental into savage metal slide guitar boogie with a singalong chorus, leaving ‘Living On Your Own’ to finish off the album as another song about feeling an outsider wherein echoed power chords, grinding riffs and metal funk bass lines each play their part and half-way in they decide to dismantle ‘Beck’s Bolero’ as if adding Entwistle and Townsend to that formative Page, Beck and Moon session. Again, it’s the separation that makes this CD stand out, the drumming particular. This got them into the charts, but Boot was out, apparently Shelley had wanted fellow Welshman Steve Williams all along, but he’d been busy with a formative version of Lone Star. Still, it established the band’s first link with the Midlands.

For Bandolier Bourge applies a gnawing slurry of steel-grinding notes then they’re off for a heavy shuffle with ‘Breaking All The House Rules’; Shelley delivering some cool jive spiel amidst sexual grunting, another divergent riff and lots of false endings, and ensuring all three albums in this collection start off well. The acoustical ‘Slipaway’ is almost sea shanty folk prog with added piercing melody electric solo and Shelly singing falsetto but it’s ‘Who Do You Want For Your Love?’ that’s the forgotten gem: Reggae funk metal well before its time, with Williams’ offbeat drum patter keeping things together before Bourge steps up the tempo to rock out and Shelley sings:  “Don’t you ever turn your back on a friend,” either inferring this was an older song or the band now had a line-up they were satisfied with. The sections return, varying and an even featuring a harmonica. Vary the tempo on this one and you can pick and choose an assortment of Metallica tunes.

‘I Can’t See My Feelings’ and ‘I Ain’t No Mountain’ both have a certain commercial flavour for the time, the latter a kind of hard rock hillbilly song released as a single, the former with its double-tracked electric and acoustic a cross between AC/DC and Boston before either existed. ‘Napolean Bona-Part One & Napolean Bona-Part Two’ is the reason most rock music got labelled Progressive back then. As a slide guitar whirls over the whimsical arpeggio opening drums skip briskly, but a volcano of frothy molten metal pours forth; rollickingly potent, echoed chords racing exuberantly from speaker to speaker, ever building. When Shelley sings “I think I’m Napoleon and others before” the madness and paranoia glimpsed through this collection nears conclusion, and rather poetically. While suffering such delusions is one thing, a similar belief regarding self-empowerment is no bad thing, and Shelley intends to embrace it as a force for music, euphorically singing “Hold me, hold me” as the collection charges to its conclusion, leaving this listener pleasingly exhausted.

Discounted by many for plodding monosyllabic riffs, listen carefully and you will find evocative arrangements and constant tempo shifts derived through various contemporary influences while helping define that classic heavy metal sound. More subtly, as a power-trio, you hear Budgie go from a band that know each other’s moves emphatically, to tweaking that sound to match the times. 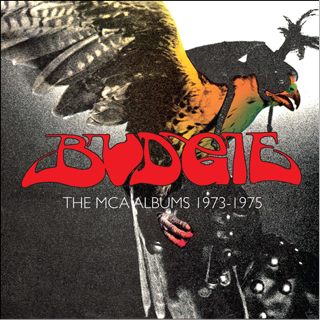 Disc One – Never Turn Your Back On A Friend

Disc Two – In For The Kill