Released in June on Sony Music and reviewed by Gary Cordwell.

‘The Blues Is Alive And Well’ – it is indeed while Buddy Guy still walks amongst us mere mortals. This is studio album number…erm (it’s not easy to keep track of official releases by 81 year old blues legends) and is, we can safely say, his first since 2015’s ‘Born To Play Guitar’. So, what is the old badass up to these days?

This album pretty much follows the same format as his other recent releases. Scorching guitar, semi autobiographical lyrics and the occasional appearance of an A-list guest or two. There is also a certain amount of dual personality going on here. There are unrepentant blasts of attitude with suitably impressive gnarly solos but there is also an acceptance, or at least an acknowledgement, of his own mortality, of reflection, of looking both backwards and forwards.

So, let’s split this into a review of two halves (note the World Cup reference. See, I know footie as you wags call it). The autobiographical tracks tend to be slower and longer, Guy easing into his backward glances. The lead track finds him hoping for a few more good years – his voice, while still commanding, has a new hint of fragile vulnerability. Mortality rears its inevitable head again on ‘When My Day Comes’ – “if you see me rusting, don’t you grease my chain” he implores. Erm, ok.

‘End Of The Line’ is fairly self-explanatory. And the end of the line he most certainly is. He’s the last man standing. The last original. Hell, he was a house guitarist at Chess Records – he’s living history. “I won’t be quiet, I won’t behave”, he assures us before launching into an overdriven solo.

Which leads us to the second half. The bangers. And there are plenty of them. There are several scorching 12 bar blasts although be warned, Buddy hasn’t exactly joined us in the 21st Century in regard to sexual equality. But then this is the blues, if we added sexual equality to it’s DNA it would shrivel up and die. A cover of Sonny Boy Williamson’s ‘Nine Below Zero’ is as fiery and savage as you’d hope for, he does the notorious SOB proud.

Oh yeah, the guest stars (OK, so it’s a game of three halves – so sue me). young up-and-comer James Bay holds his own, tagging along at heel like an eager puppy. Buddy then holds a summit meeting with Keith Richards and Jeff Beck on ‘Cognac’ in which he namechecks his old boss, one Muddy Waters. The three trade licks with autumnal glee (Beck wins on points). Mick Jagger pops up on ‘You Did The Crime’ to remind us what a fine, overlooked blues harp player he is, easily the equal of Guys old sparring partner, Junior Wells.

And let’s not forget the filth (four. Four frikkin’ halves). Buddy, apparently, enjoys “cookin’ on a wood stove. I like things well done”, I’m not sure exactly what he’s getting at here but I’m pretty certain it’s NSFW. And the less said about ‘Milking Muther For Ya’ the better!

This irreverent octogenarian has produced another fine album, one he can be justifiably proud of. Special mention must be made of ‘Whiskey For Sale’, which finds new ways to move the blues forwards. Handclaps, wah wah and slide add a touch of funk while the production is sharp, full of hip hop beats and contemporary tricks. If the blues can stay this on point it will never become a dead art form. Buddys solo, when it comes, keeps things real. Dripping with attitude, it’s a junkyard dog of a thing. Thank goodness there’s a chain around its neck, tethering it to a shiny new post. But man, can it still snarl! Buddy “motherfucker” Guy. Indeed. 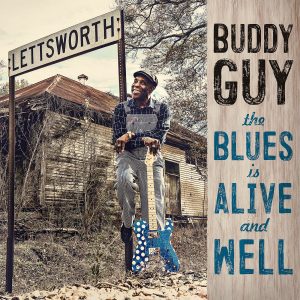