Brujeria are back with some red hot Mexican mayhem, reviewed here by Paul ‘get me a water’ Castles, and released by Nuclear Blast on 16 September, 2016

When Donald Trump speculates about building a wall to keep Mexicans at arm’s length you suspect that that might include the likes of Brujeria. The band were formed in LA in 1989 almost as a direct response to the widespread police oppression that was almost as daily an occurrence as brushing your teeth. Their debut album Matando Güeros (Killing White People) not entirely surprisingly rattled more cages than a cornered tiger and the 1993 release duly received more banning orders than a Soho sauna.

Unfortunately current Stateside events show that in many ways the past quarter of a century – much of which has taken place under the stewardship of a black President of course – has in fact made scant difference to the daily lives of the US underclass, So against such a violent backdrop Brujeria have decided that this is the optimum moment to return with their cause as relevant today as it was around the time the LAPD were gunning down Rodney King. Pocho Aztlan, which translates as Wasted Promised Land, is the result.

Musically the levels of primal brutality associated with Brujeria have seen them labelled as the Mexican version of Napalm Death, although they’re not quite as savage as that. A degree of mystery has always surrounded some of the individual band members, criminal connections often suggested, with the whole gangsta links reinforced by band members posing with bandit masks for band photos. The likes of Shane Embury  (Napalm), Jeff Walker (Carcass) and Dino Cazares (Fear Factory)  have all played their part within Brujeria at various points but what we do know for sure is that the driving force behind the LA crew is Juan Brujo and Pocho Aztlan is the band’s first album in 16 years.

Aztlán is the ancestral home of the Aztecs, and the term ‘pocho’ is frequently used by native Mexicans to refer – and not in a nice way – to their counterparts born in the States. Brujo himself is pocho and pochos can sometimes get a rough ride in Mexico. Equally they tend not to be flavour of the month in the US either leaving Brujo almost living in a kind of no man’s land.

The lyrics (all in Spanish) reflect the three issues that tend to be the focus of a pocho’s life, drug wars, racial tension and US-Mex border battles. It’s heavy shit for sure and that transcends into a pummeling soundtrack that make up this invigorating slice of LA life, the side the tourists don’t see – unless they’re unlucky or stupid.

Songs such as ‘Profecia Del Anticristo’ invite comparisons with Soulfly, a similar Latin spirit contained in an energetic tight thumping soundtrack that stomps around like an angry toddler. Any fans of the Netflix series Narcos will appreciate the commanding jawbreaker ‘Plata O Plomo’, written in honour of Pablo Escobar.

You don’t have to be down in the hood to get some idea about how Bruj, Brujeria and the pocho community view the prospect of Trump lording it in the Oval Office. But with a nice twist Brujeria actually put out a vinyl single earlier this year called Viva Presidente Trump pressed on vinyl colors representing the Mexican flag now a collectable on ebay.

As Brujo explained at the time: “If I came out and said, ‘Kill Trump,’ there’d be a lawsuit. We wouldn’t win that, so we said ‘Viva’ – long live the king. We want him to win so we can fight that war. We wanna show that we can win it without the bullets.”

The album closes with the pounding ‘Debilador’ and a raucous rendition of the Dead Kennedy’s California Über Alles, neatly modified to ‘California Über Aztlan’, the DK frontman Jello Biafra having also been part of the Brujeria brotherhood down the years. 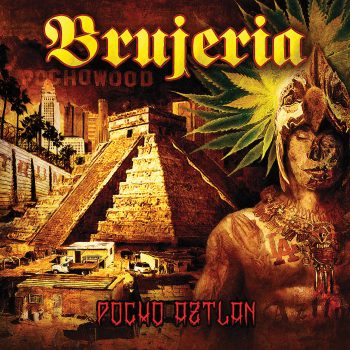