Howling to the armadillos?

So, Broken Witt Rebels are from Birmingham. Well that’s no surprise, The South oozes from these grooves. What’s that you say? Birmingham UK? This Birmingham? Our Birmingham? Not Birmingham, Alabama! Well that’s a bit harder to swallow because this here EP sounds as authentically ‘Down Home’ as you can get, short of playing Skynyrds first album on repeat. They sound like grizzled extras from ‘Duck Dynasty’, not the fresh faced, nattily attired young hipsters of the above video.

‘Low’ comes at you with swagger. It grooves, rocks and effortlessly slips into a totally convincing gospel/work gang chant before ending with a wheeze of slide geetaw. Danny Core’s vocals are the real deal – powerful, bluesy, raw and soulful while James Tranter’s guitar is greasy, classy and perfectly pitched, never showy, driving the songs like Casey Jones (ask your Dad).

‘Suzie’ showcases the bands soulful side. But not airbrushed, slow jam, blue eyed soul, oh no – proper soul. Stax soul. Muscle Shoals soul. Wilson Pickett and Duane Allman trading licks, Steve Cropper beefed up for millenials. ‘Georgia Pine’ is a funky thang, winding and flowing like the Mississippi – Southern rock filtered through a Brit Indie sensibility. Yes, Kings Of Leon are an obvious touchpoint but The Rebels are much more than that. These boys feel like a real band, Core out there, kicking up the dust on Route 66 – howling to the armadillos or gators or whatever you find there …you get my drift.

‘Guns’ displays the bands flawless knack for an unforgettable melody. It accelerates gradually, building up a head of steam, until it’s a flat-out, good ‘ole rebel anthem. It’ll be huge live and goes to show why the band have been chosen to support Country outlaw dude Brantley Gilbert on his upcoming UK tour. This band could be huge with a follwing wind. And they’re local! They’re talented, confident, ambitious and several shades of awesome! If the promise shown here follows through to their debut album then the only way is up! Get out there, catch them live and pick up this EP when you do. 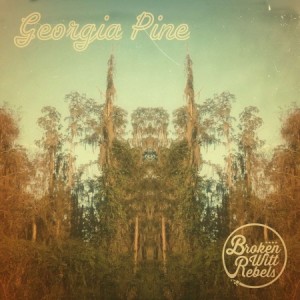