Cures all manner of ailments….

A cursory glance at the cover of ‘Tao Of The Devil’ gives you all the info you need. A colourful, trippy image of a marijuana leaf and a photo of California at dusk, probably taken from a desert vantage point. Humid, hazy. This is gonna be fuzzy. And jammy. And a few more of the seven dwarfs psychedelic cousins. But then this is the latest release by Brant Bjork and his band, The Low Desert Punk Band. And again, that pretty much sums up the sound. But hey, its Brant Bjork…Kyuss, Fu Manchu, Mondo Generator, he virtually created the scene. It’s kinda doubtful he’s going to be playing math rock.

Despite this, Bjork has stated that the sound of this album will be “more focussed, more song oriented”than his previous release, ‘Black Power Flower’. Urm, ok, I’ll take his word for it but ‘Tao’ doesn’t sound like too much of  a radical departure to me. In fact, it sounds like the product of one long, blissfully laid back early evening jam session. And if you’re going to listen to this then do it soon, heat and sun are essential requirements to the full enjoyment of this.

One noticeable difference though, is a much more bluesy feel to the proceedings. The one string, down home intro of opener ‘Gree Heen’ ushers in the blues before a minimal, monolithic riff boasting shades of Soundgarden kicks the doors in. Stoned and smoky, it grooves along soporifically while Bjork urges us to “keep keeping on”. It then briefly kicks up a gear before drifting back into (stoned) immaculate lethargy again.

And the album continues to groove along on it’s lycergic way. ‘Humble Pie’ nods to it’s 70’s namesakes with its funky bluesiness and spindly Haight Ashbury jamming. ” I was born in the heat of Southern California” Brant informs us as he kicks up the desert sand on a track that could happily have resided on the ‘Easy Rider’ soundtrack. The middle of the album jams out to mellow perfection, guitars entering the fray when they feel up to it while the funk quotient begins to increase, the slinky breakdowns sound as though Lenny Kravitz has decided to sit in.

‘Biker No.2’ does what it says on the tin – fried, easy desert biker rock with an unhurried solo. And then we drift into the (no irony intended) high points. The 10 minutes of ‘Dave’s War’ shuffle along in a lethargic dreamy haze, its initial Stooges riff nodding out into a percussive, bongo-led jam which is happy to sit back and soak up some rays while Brant mutters something about “funking up your world” under the groove. And then off it goes into an even funkier riff of almost ‘Starsky And Hutch’ proportions. Honestly, this meanders all over the shop…in a good way. And finally we have the pitch black, scorched earth fuzz Robert Johnsonisms of the title track. This slooooow blues is a definite highlight – dark, elemental and oh so elegantly wasted.

So there you have it, man. One of the founding fathers of desert rock, doing his thang with nothing to prove, end even if he did I don’t think he’d give a fuck. He was central in creating a sound, almost an ethos and so he has no need or desire to go about changing things. He was one of a blessed few who plugged in and played in the desert…and kept playing until people came to see what the righteous noise was. And he’s still doing it. Cool. 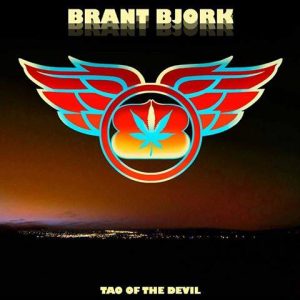