Reviewed by Brian McGowan and released by AFM Records 13 April 2018.

Bonfire‘s continued popularity and success confounds critics, of the genre at least, if not the band. And you could hardly describe each new album as a reinvention. They have constantly returned to their core territory – melodic hard rock – in the creation of fresh recordings. That of course is down to the leadership of mainman/songwriter/guitarist, and only remaining original, Hans Ziller.

Surprise then that while Temple Of Lies is hardly a reinvention, Ziller has clearly recalibrated the band’s normally conservative AOR sound. This is partly to showcase new vocalist Alexx Stahl’s multi octave vocal range. His fittingly shrill, take-no-prisoners vocal on ‘Temple Of Lies’, effectively the opening track, is a clarion call. A power metal political polemic, weakened only by the worn out familiarity of the sentiment.

The other eight tracks twist and turn through AOR, Melodic Hard Rock and Metal… a mixed bag that might not resonate satisfyingly in the collective consciousness of the band’s considerable fanbase but, it dares to be different. And sometimes that’s enough.

Long time fans will recognise the AOR style of ‘On The Wings Of An Angel’ as the touchstone of the band’s formative years, recalling post grunge giants of the genre like Zeno and Fair Warning.

‘Stand Or Fall’ and ‘Never Be Loved By You’ are precision turned takes on the melodic metal template, touching all the bases, ticking all the boxes, both reassuringly cliched in their fist pumping, lighter waving, crowd surfing glory.

But a nagging feeling remains that all the pieces just aren’t fitting here, and you’re kinda hoping that Ziller will nail down a sound or simple concept with the clarity and vision of those great Bonfire albums of the eighties. Maybe that’s expecting too much. That was then, this is now.

Still, the band reach way back in time to come up with closing track, ‘Crazy Over You’, the best song that Jon Bon Jovi and Desmond Child never wrote, the kind of stuff that Brother Firetribe are doing nowadays with style and panache. It’s an appropriately apposite end to an album where you’re not quite sure what’s coming next. 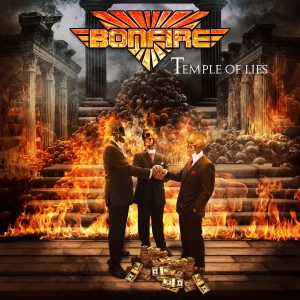