Swedish rockers Bonafide are touring in support of their latest album Flames, while this current trek also marks their tenth anniversary. Joining them on tour are recently signed Off Yer Rocka labelmates Tequila Mockingbyrd, while compatriots Killer Bee open the show.

Killer Bee are a Swedish-Canadian band who achieved some success in Europe, including a number 1 hit single, before splitting in 1997. (A story that involves a dodgy promoter/manager and a few million missing Swiss Francs). Despite being a nineties band, their sound is somewhere between the seventies and eighties. They returned in 2011 and have a new album out now, Eye In The Sky. Their set opens with the title track. With its refrain of “Who’s watching you”, it couldn’t be more topical given the recent news that even our smart TVs may be spying on us.

Frontman Brian ‘Bee’ Frank appears unhappy with the sound at the beginning of the set. He urges the crowd to move forward, apparently the barrier is there to protect us from the band. Other songs that impressed included ‘All Night Long’ and ‘Children Of The Evolution’. As the opening band it’s a short set, hopefully we’ll get to see more of Killer Bee in the UK soon.

Tequila Mockingbyrd first came to our attention on the Aussie Wrecking Crew Tour with Massive and Black Aces. They made a big impression then and barely seem to have been off the road since. Debut album Fight and Flight is officially released here in April, but it appears to be doing brisk business at merch tables up and down the UK.

Bass guitarist Jess Reily is missing from this tour, much credit goes to Keira from Syteria for stepping in. Keira joins Estelle Artois on guitar and vocals and the powerhouse behind the drum kit, Josie O’Toole. Estelle begins the set by saying “Let’s have some fun” and that’s what Tequila Mockingbyrd are all about.

We hear most of Fight and Flight tonight, from the tribute to their hometown of Melbourne, ‘Never Go Home’ to the sassy attitude of ‘Why Are We Still Friends’, a song about Facebook stalking your ex. The slow burning ‘This Ain’t Dead’ is contrasted by the Ramones cover ‘Somebody Put Something In My Drink’. The alcohol theme continues with the short and sweet ‘Jagerbomb’. By the time they end with ‘I Smell Rock ‘n’ Roll’ it’s clear to everyone why the ‘T-Byrds’ are flying high. 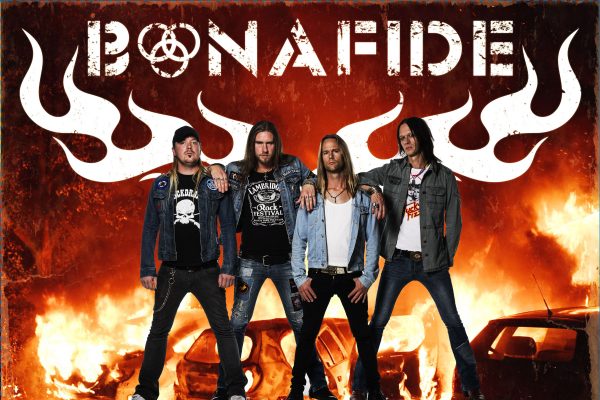 Bonafide stroll onto the stage and Pontus Snibb asks if we’re ready to rock ‘n’ roll. If you’re a regular at Hard Rock Hell events, it might seem unusual seeing Bonafide this side of midnight. Definitely the go-to band to keep the party going.

The new album’s opener ‘Back In The Flames’ also kicks things off here in scorching style. From something new we’re then taken back to the early days of Bonafide with ‘Dirt Bound’. There’s a couple of songs from 2015 album Denim Devils before we’re regaled with the bluesy tale of ‘Peg Legged Pete’ (and his girlfriend one armed Sue).

‘Smoke & Fire’ is another from Flames, the first single released from the album. It’s a shame we don’t get to hear ‘Bottle of Jack’ tonight, one of the stand-outs on the album. But given the prolific nature of the band over the past decade, there’s a lot of ground to cover. ‘No Doubt About It’ has one of those big choruses that Bonafide do so well. The influence of AC/DC is never far away, none more so than on the intro to ‘Rag and Bone Man’. Well, with the Aussie giants seemingly coming to an end, it’s amazing that we have a few killer bands like Bonafide, along with the likes of Airbourne, Screaming Eagles and Black Aces, to continue flying the flag.

‘Power Down’ is the last new song before we go way back to ‘Hard Livin’ Man’ from Something’s Dripping. Finally, ‘Fill Your Head With Rock’ is a celebration of this music we love. Pontus Snibb abandons his mic mid song to sing from the edge of the stage, showing the power of his voice. Of course, the Birmingham crowd sing that irresistible chorus back to him. There’s no encore tonight, but surely there couldn’t be a more exhilarating way to finish than that song.