Sumerian Records have made a name for themselves pushing new and exciting acts (The Dillinger Escape Plan, The Faceless etc.) which makes them the perfect vessel to re-launch a band that have had a massive impact on the metal scene over the years. That’s right, Body Count are back motherfuckers. Yes, Ice-T’s hip-hop-cum-hardcore act has returned with what is one of the most openly, unashamedly fun albums of the year. At 57 years old, Ice is sounding as ferocious as ever barking ‘Get A Job’ and forcing wasters ‘Back To Rehab’. After eight years with no new music, the guys decided it was time to ‘bring the gravity’, once again.

A revamped cover of Suicidal Tendencies ‘Institutionalised’ see’s Ice deliver the now immortal line, ‘I don’t give a fuck about Oprah, Oprah ain’t got no man!’ as well as rants about vegans, Xbox and getting his email password reset. ‘Bitch In The Pit’ has been described – by the band – as ‘empowering women’ and discusses the fact that women who actually get into mosh pits are badass, and has one of the grooviest riffs on the album alongside some faster, more thrash-influenced sections. The lead single ‘Talk Shit, Get Shot’ is surely one of the most exciting rap-metal tracks released in the last few years at least, and the video only goes to further increase its potency.

Manslaughter isn’t a sophisticated, progressive, thinking man’s album. But I can’t see you buying it with that in mind… it’s an album that begs to be turned up load and accompanied by a few too many beverages. Don’t over think, just sit back and spit some bars with Ice and co. It’s not the most ‘trve metal’ thing ever but fuck it, it’s okay to take a brief break from Slayer every now and then. 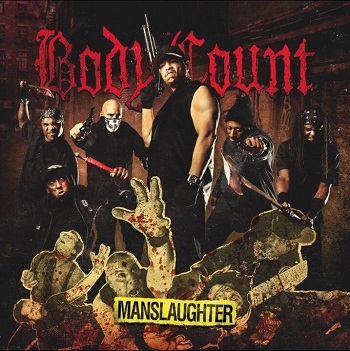