Not a comeback. He just never went away.

Any rock fan who’s been paying attention will know that Bobby Kimball‘s career is inextricably entwined with that of Toto. It’s a nice twist that Kimball’s 4th solo album goes back to the musical style of the legendary Boz Scaggs, whose 1976 album Silk Degrees spawned a handful of Top Forty Hits, co-written with David Paich, who also played on the album along with Jeff Porcaro and David Hungate. These three musicians went on to form Toto.

We’re Not In Kansas Anymore explores Kimball’s fascination with Scagg’s mix of soft rock and smooth, blue eyed soul, mixing in some jazzy elements that usually blend but occasionally jar with their surroundings. There’s plenty of hazy rock with dreamy guitar textures, underlined by pumping brass.

The songs have weight and gravity. You can almost read the sign: Serious musicians at work here. But it always stays this side of entertaining, with a velvety glow of nostalgia radiating from many of the tracks. Of those that don’t … on ‘Met Her For’ Kimball sounds triumphant, denouncing a past he’s glad to leave behind, welcoming a bright, if uncertain future, the sentiments nicely packaged in a muscular, Beatles do Westcoast rock arrangement. And on ‘You’ll Be With Me’, a ballad sketched around a Lennon-esque piano, Kimball emotes gracefully, personalising a lyrical, love-conquers-all narrative.

‘On My Feet’ and ‘One Day’ particularly are a move back to the lush (and often soulful) sounds of seventies Westcoast rock of Steely Dan and the Doobies. It’s how the music sounded before it got sanded down and polished up to make it arena ready for the eighties.

Elsewhere, ‘Flatline’s rich mix of sparkling, energetic sophistication might remind you of the heavily Toto inluenced Norwegian band, Lava, and ‘Hey It’s Me’ shoehorns funk, pop and rock comfortably into a short but eminently sweet 2 minutes and 50 seconds.

The overwhelming sense you get from We’re Not In Kansas Anymore is of Kimball flirting with a past he never abandoned. It’ll still turn a few heads. 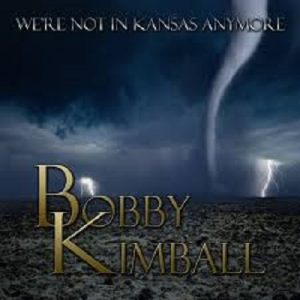