A perfect album to chill out to…

Capitalising on their recent success and continued touring, the Swedish-French-American melting pot that is Blues Pills are releasing a limited run of a live album. The imaginatively titled Blues Pills Live is taken from one solitary live performance, that of their headline slot at the German Freak Valley Festival. With only the one album and a couple of EPs to their name, releasing a live album is a bold move. However it is one that, even on first listen, is completely justified. It’s an absolutely incendiary performance; the whole band is on top form and gelling instinctively together, and often on extended jams, it’s something that only comes with the culmination of many hours playing together.

The five minute studio version of ‘Ain’t No Change’ is transformed into a glorious eight minute masterclass of blues rock elevating a great track into something truly exceptional. It’s the kind of thing that made all of those live albums of the 70s so thrilling. Anyone who has seen the band recently will attest that the delicate touch of Dorian Sorriaux on guitar belies the depth and power he brings out in his playing. His style and tone drawing heavily from Peter Green. That depth is matched by Elin Larsson’s vocals ranging from soulful blues to all out rock that’s sure to send a shiver down a spine or two.

‘Black Smoke’ is also reworked with an extended and heavier introduction than the familiar studio version, with the angry lyrics dispensed with conviction. For those fans that only own the album, this release does give the opportunity to hear earlier EP releases of ‘Bliss’ and ‘Dig In’. More than just a stop gap, hopefully this release is a pointer to a much longer and more successful career for the Blues Pills. I certainly reckon it’s going to be on heavy rotation on the car stereo for a good while to come and makes a perfect album to chill out to on the forthcoming balmy summer evenings.

The album will be released on a limited run of vinyl and digibook CD only and promises not to be re-pressed. 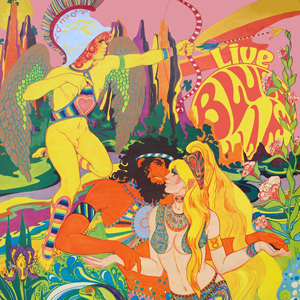