Apart from a couple of festival appearances, and a one off in London when they celebrated the 40th anniversary of their Agents Of Fortune album, it’s been a decade since the Blue Oyster Cult brought their songs of bikers, blood, UFOs, and mysterious passions to the circuit outside London, but an absolutely packed Rock City showed that they still have a big following on this side of the Atlantic.

JARED JAMES NICHOLLS and his band provided support on the night, and his hard edged blues playing went down really well with this crowd. This is an old fashioned, blues rock power trio, with Nicholls himself filling the guitar hero role to perfection. There are obvious influences in his playing and the band’s sound, such as the great bands of the 1960s and 70s like Cream, Hendrix and Free, but the band infuse it with a modern touch and their own style, and make it a very enjoyable thing in its own right. While his own songs, like ‘Baby, Can You Feel It’ and ‘Don’t Be Afraid’ are good enough to get the crowd onside, the set closer is a cover of the old Mountain classic ‘Mississippi Queen’, giving Nichols another chance to peel off some more searing guitar licks and strongly suggesting that the next time he headlines his own gigs on these shores, many of tonight’s crowd will want to be there. 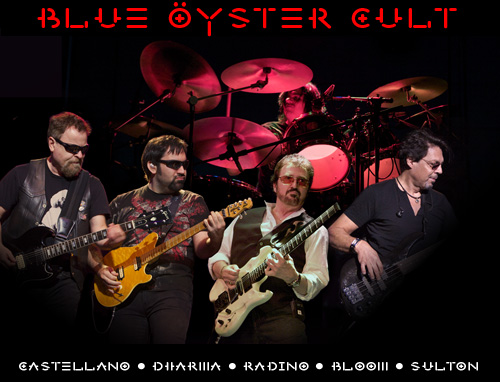 This time around, BLUE OYSTER CULT are touring in honour of the 45th Anniversary of the release of their debut album, so it was natural that a number of songs from the album were included, including set opener, ‘Transmaniacon MC’, and, after a magnificent ‘Golden Age of Leather,’ with the crowd in full voice, an equally wonderful ‘Before The Kiss, a Redcap’, with Eric Bloom telling the tale of how the song got its name. It may not be a surprise that the story involves a bikers’ club and an unusual method of passing someone a barbiturate of some kind. It was interesting that the band didn’t play possibly the most well-known song on the album, ‘Cities On Flame (With Rock’n’Roll)’, but this may well have been in response to recent events in London. But we did get such deep cuts as ‘Screams’, and from that moved straight into the wonderfully weird ‘She’s as Beautiful As A Foot’, which was genuinely unexpected

As well as the debut album songs, the band also produced several surprises from the rest of their history, including two rarely played songs from Agents of Fortune, the gentler ‘True Confessions’, and a fast and furious runt through of ‘Tattoo Vampire’, as well as ‘Lips In The Hills, from the Cultosaurus Erectus album. No ‘Marshall Plan’, though, sadly. We were also given what many thought was the band’s sideways nod to the disco era, ‘Shooting Shark’, with Danny Miranda’s shuffling bass line urging it along, and Richie Castellano coming to the fore to give us a great guitar solo. This obviously inspired Don ‘Buck Dharma’ Roeser, who’d been comparatively quiet up to then, at least on guitar, as he delivered an absolute belter of a solo of his own to round the song off, before taking the lead for an absolutely awesome ‘The Vigil’.

I always think it’s strange, and a little disappointing, that whenever fans start debates about the great guitar players in rock and metal, Buck Dharma’s name rarely comes up. He might not be the archetypal guitar hero, or an innovator like Van Halen or Vai, but while he can shred with the best of them, he can also play supremely lyrical and melodic solos, and more often than not, his work is perfect for the song he’s playing. On another of the songs from the debut, ‘The Last Days of May’, he plays some fine blues licks as the song builds in tension and then his solo develops into an extended workout, with the band working up to a crescendo, then almost instantaneously, the original mood returns as Buck delivers the song’s lyrical twist in the tale. Brilliant stuff.

For all the surprises in the set, they didn’t neglect the fan favourites, The insistent riff of ‘Harvester of Eyes’ got a huge cheer early on, and when you can end the main set with two songs as iconic as ‘Godzilla’, with the crowd almost word perfect, with some even trying to emulate Eric Bloom’s Japanese news reader, and ‘Don’t fear The Reaper’, you’re almost certain to go out on a high note. To most of the audience’s delight, the first encore song was ‘Dominance and Submission’, with Eric Bloom inviting them to take the ‘dominance’ part of the chorus, and then a blistering ‘Hot Rails to Hell’, with Castellano taking the lead vocal, to bring an absolutely tremendous two hours of music to a close.

Even 45 years on, BOC are still a highly potent live act, with a ridiculously rich back catalogue to draw on. Apparently there’s even talk of a new studio album next year, but let’s trust it’s not another decade before they come back to enthrall and entertain us again.