UK death metal trio Bludgeon have developed a reputation as ferocious live performers. Although originally formed in the mid-90s the Essex extremists are only now in a position to push on with this debut album. It answers the question as to whether the carnage of their stageshow can be captured in the studio. It can… and they have… and on Devoted To Lunacy Bludgeon have successfully mirrored that raw as sushi live sound and spread their carnage across 11 throat-ripping tracks.

Things open up with an explosive intro of such aural destruction it really should come with an advisory note recommending the listener wear a hard hat to avoid any of the debris that flies dangerously through your speakers. Once the whole package comes together on the likes of ‘Fascination with the Lifeless’ and the pounding ‘Cognizant Dichotomy’ the effect is about as subtle as a bare knuckle punch to the jaw. Fast enough to attract a disapproving nod from the aural speed police, this will put blisters on your blisters as the guitar work here is frightening at times.

With song titles such as ‘Cattleprod Episiostomy’ and ‘Dreaming of the Meathooks’ this is not an album to eat while munching on a vegan sausage role. It’s bloody stuff alright and Bludgeon seemingly are intent on dragging the extremities of visceral tech death to its gut-wrenching limits. While not as packed with blastbeats as more conventional death metal cuts, there are a few moments when a good old stomp takes over, notably on ‘Hideous Malformations Through Incest,’ one of two tracks in which Mike Majewski of Kill Everything offers supporting vocals.

Devoted To Lunacy is nightmarish at times and linger too long and you’re likely to take a hit. Bludgeon don’t do nice. But if you’re in the mood for some knuckle-dragging brutality in which flesh and bones collide with devastating force then this album will not disappoint.
Brief respite comes in the shape of gentle guitar instrumental ‘Malefic Volition’ but the gore flows straight back after in the form of the toxic tornado ‘When the Taxidermy Begins’.

’Erogenus Catamenra’ sustains a pummeling rat-a-tat-tat pre-programmed beat that will have you seeing double before Bludgeon gradually wind the pace down as they toy with the tempo and the vocals enter broken glass territory. Having successfully matched the level of splattergun savagery carved up by the likes of Pighead, Teethgrinder and Disgorge  Bludgeon bring the shredded curtain down on Devoted To Lunacy with the surprisingly introspective instrumental ‘Tenebris Aeternum’, however by then the damage has well and truly been done. 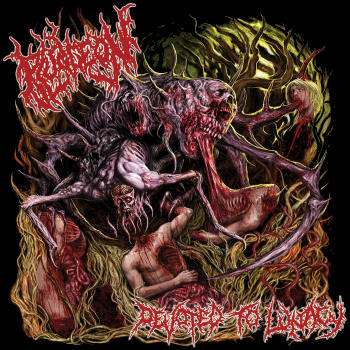