What happens when you’re obsessed with the lofty ideas of the evocative and perhaps most misunderstood philosopher Friedrich Nietzsche? You make an equally weighty, provocative album. As evidenced by it’s 22 syllable title Bloodthirst‘s I Am Part Of That Power Which Eternally Wills Evil and Eternally Works Wrong is an album that grapples with those epic Nietzschean themes and, rather appropriately, presents them in a full blown concept album.

Still led by the irrepressible guitarist and vocalist Rambo, Polish band Bloodthirst have been mining a rich seam of blackened thrash for two decades while remaining staunchly defiant in the face of fads and trends. Rather surprisingly I Am Part Of That Power Which Eternally Wills Evil and Eternally Works Wrong is only the bands 4th full length album but in terms of naked aggression and inventiveness it rivals their 2007 debut Let Him Die. Atmospheric, like all good black metal should be, this album opens with ‘Pure Madness Heals’ a track which breaks like a thunderclap from a leaden sky. Wasting little time on niceties the album immediately references the second wave of black metal with blast beats permeating and a deliberately lo-fi sound that brings to the fore primitive, pounding drumming which are overlaid by some suitably peeved vocals.

Bloodthirst have created an album that goes straight for the throat and doesn’t let go for 40 minutes. There’s little in the way of ambient interludes or classical motifs but, nevertheless, there’s a lot of variety here but it’s all drawn from the extreme end of metal. ‘The Conscious Serpent’s Will’ makes good use of the Devil’s tritone which gives the song a real groove metal feel and the track literally swings. ‘The Invincible Eagle’s Power’ has a definite thrash influence, especially the guitars which recall the ’80s ferocity of bands like Xentrix and Onslaught. An interesting midsection swirls and seems to suck the listener into the depths of hades with vocalist Rambo sounding like a soul condemned to eternal fiery damnation.

Hailing from Poznań Bloodthirst describe themselves as purveyors of ‘anti-Christian thrash’ and that’s a pretty apt description and with influences drawn from Morbid Angel, Bathory and Kreator the resulting sound is something of a volatile mixture. With angular guitars encased in hard hitting drums ‘Sons of Fire’ has an aggression that’ll appeal equally to thrashers and black metal aficionados. While the overarching concept to this album ensures it works as a cohesive whole, every song has a unique feel which means you can dip in and out at will. For example should you have a craving for something heavy then skip to track 5, the masterful ‘The Golden Cages of Sin’, which is a four minute pummelling and goes straight for the jugular with some explosive guitars underpinned by some powerhouse drumming.

‘Beyond the Concept of Reason’ begins with a riff that’s so arresting it should be illegal. Some fine gruff vocals act as a foil to some almost choral chanting and it’s just one of the many tension of opposites that make this album such a rewarding listen. Blast beats nestle next to chugging riffs and brutal intense passages sit easily with huge cavernous, spacial sounds. ‘No Tongue For Their Ears’ is the shortest track on the album and tears out the blocks like a greyhound after a hare. It undulates like huge waves and marches like an army slaying all in their path. With a guitar painting concentric circles ‘A Man Should Be Defeated’ finds Bloodthirst like graffiti artists scrawling their sound on every available space. Final Track ‘Ubóstwinoa Nicość’ (translates as ‘Nothing Nullified’ I’m reliably informed) finds the band ditching English and singing in their native Polish. It really works and I wish there was more Polish vocals on the album as the Slavic tongue welds to hard music perfectly. The song neatly encapsulates all the bands key elements and ferociously races to a finale. Like two parallel lines meeting in the distance the albums ends on a rather ominous tone.

Trying to capture the lofty ideas of Friedrich Nietzsche on a 40 minute album would be difficult for most bands but I Am Part Of That Power Which Eternally Wills Evil And Eternally Works Wrong works precisely because Bloodthirst have firmly grasped said philosophers ideas and subsequently this albums sounds exactly like a Nietzsche novel reads. 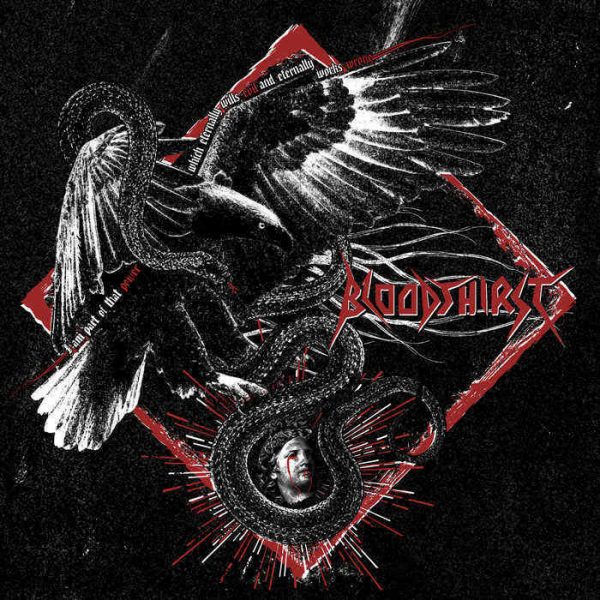