It looks as though we’re in for a blustery, rainy Bloodstock this year, and as we enter the car park the usually lush green grass of Catton Park has already begun to turn a little muddy. Wellies on then and let the metal shenanigans commence.

Control The Storm take to the Sophie Lancaster Stage early on. Having recently released the single Forevermore, their set doubles up as an album launch party, complete with pyro and an impressive lighting show. With melodious riffs and power chord heavy choruses, Control The Storm conjure a sound that borders on 1980s glam rock, edging into Eurovision territory. With Firouzeh’s powerful vocals and dramatic dance movements, one could easily mistake her for the star of a West End musical. Wearing a black leotard with a sheer black cloak draped over it, she moves her arms like a vampiric Bollywood dancer. 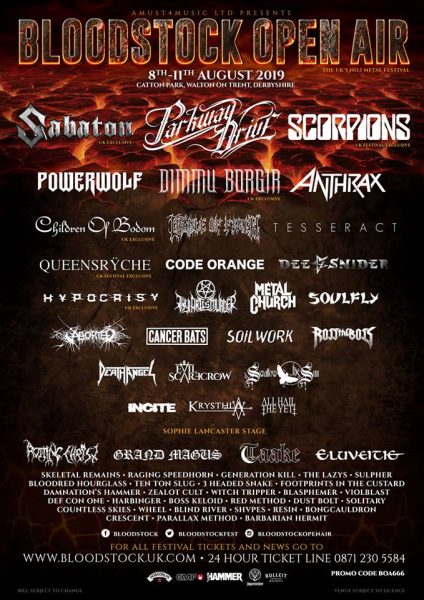 Over on the main Ronnie James Dio Stage, Californian speed agents Death Angel, explode into life with all the vigour of their 80s heyday. This is singalong thrash, complete with legendary anthems such as ‘Voracious Souls’ and ‘The Ultra-Violence’ which instigate the first of the day’s moshpits. It’s hard, fast and catchy as hell. Saying this, ‘Humanicide’ – title track of their latest album, released in May – goes down a treat as the thrash veterans bring a thunderous set to a close.

Fellow Californian crew Metal Church appear a little laboured by comparison and fail to achieve quite the same energy and quality. Although the riffs remain solid and heavy, Mike Howe’s vocals sadly appear strained at several points during their set.

A change of tempo next as we make the short stroll over to the Hobgoblin New Blood Stage. Oxfordshire’s The Hope Burden take to the stage with an intoxicatingly bleak soundtrack. Building up the atmosphere through meticulously delivered repetitive riffs, they create a sense of dread and despair that would be welcomed by any worthy doom or black metal worshipper.

In contrast, BongCauldron almost bounce onto the Sophie Lancaster Stage clearly intent on savouring what they inform us is their last ever live show, and this despite only having released their EP Tyke last year. Heavily distorted, slowed-down riffs caress this Stoner set. Although something of a bittersweet Bloodstock for the Leeds boys they go out on a high, bringing on Mastiff frontman Jim Hodge to join them for one last climactic sludge sesh.

It’s always a lot of fun to see Mr Max Cavalera at play. Soulfly take to the main stage mid-afternoon for a much-needed dose of Brazilian brutality. The intro to ‘Prophecy’ rings out across Catton Park like the call of the sirens, beckoning the willing headbangers to their worthy deaths. They inject an impromptu cover of Bob Marley’s ‘Stand Up For Your Rights’, before Max delves into a captivating performance of ‘Tribe’, playing the berimbau and singing in Portuguese down a mic somehow concealed within the outsized native instrument that resembles a bow and arrow. A favourite from their debut album back in 1998, the song is a timely reminder of how legendary Max has become.

Saying this, songs from their latest album Ritual feature heavily too, opening with ‘The Summoning’. There isn’t even a whiff of Sepultura today. Soulfly end with the crowd-pleasing ‘Jumpdafuckup’ – recorded with Corey Taylor in 2000 – which has even the most stony-faced, corpse-painted, leather-studded Bloodstocker leaping around like a Sex Pistol.

Children of Bodom follow on the RJD stage. This is a band plagued by controversy following a somewhat dramatic style-shift a few years ago. Saying this, although songs like ‘Are You Dead Yet?’ and ‘In Your Face’ may be a little cheesy, they are nevertheless fun and still boast some killer keyboards – and old school Bodom favourites like ‘Downfall’ also still stand up well. Despite this, things don’t run smoothly for the Finns. Whether it is a technical issue, a timing issue, or the high-force gales playing havoc across the vast site – sadly, Bodom’s set is at times awkward and clumpy, with delayed guitars during verse/chorus crossovers and uneven vocals.

Meanwhile, over on the Sophie Lancaster Stage, Countless Skies return to Bloodstock after appearing here in 2015. Since then, they have released their debut album New Dawn and more recently a new single in ‘Tempest’. There is no doubt that bassist Phil Romeo steals this whole show with incredible vocals; you kind of feel like he should be performing in an opera. It’s a true spectacle to behold and adds an unmatchable and completely original dimension to Skies’ particular strand of melodic death metal.

Bloodstock’s full opening day concludes with the ultimate metal soldiers of war; Sabaton. There is predictably plenty of camo on stage, not to mention a drumkit that impressively doubles up as a tank. There is fire, guns, and a giant sign promoting their new album The Great War. The Swedish power metal favourites always deliver an entertaining show, despite little progression or musical development over the years. Still, if it works it works. And this evening, the crowd are fully immersed in Sabaton’s wartime boogie.