When Mille Petrozza sat down one evening and wrote ‘Open your eyes and you’ll see, Satan is Real’, I believe he must have been looking into a crystal ball at the desolate landscapes of Bloodstock Open Air 2022. Similarly, back in the 1980s when King Diamond first howled ‘Is it Satan’s fall? No, it’s Satan’s call’ – there is no question that this was a premonition of their headline slot at Catton Park in 40 years’ time. The thing is, in the world of metal, there’s a lot of the old hell and devil chat – but nothing can prepare you for three days of 30+ degree weather. Welcome to the inferno, my fried friends.

Early on the New Blood stage are I Fight Bears, the South Wales Metal 2 the Masses winners. The band recently released their EP Liberosis to critical acclaim and seem to be going from strength to strength with another one on the way. This high-energy Welsh metalcore attack kicks the weekend off with a ferocious bang.

Fleeing from one shaded tent to another, Party Cannon explode onto the Sophie Lancaster stage with their unique brand of Scottish death metal. Do not be fooled by their butter-wouldn’t-melt logo, which is more Teletubbies than wall-of-death – this is metal of the most brutal kind. It’s a unique experience watching cheerful inflatables bouncing off the heads of headbanging bearded folk, flaring their nostrils at a song called ‘Partypocalypse’, an experience that everyone should have. 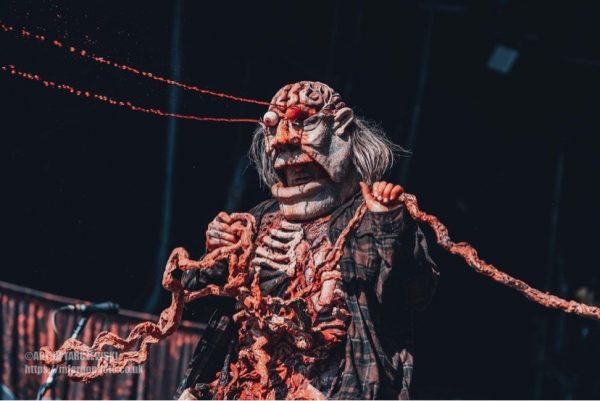 For those brave enough to take things outside, over at the Ronnie James Dio stage, Virginia’s freakish GWAR are screaming ‘I want to kill the president and I don’t need a gun’ whilst a gutted Donald Trump stumbles across the stage spraying blood over the crowd like a politically aggravated water pistol fight. For the rest of the day, I found myself constantly questioning: ‘Is that bloodied fellow injured or was he just front row at GWAR?’. Is it a pantomime? Is it a rebellion? Is it metal? The lines are blurred. Back in the shaded safety of the Sophie Lancaster tent, there is no such fun and games with explosive ’80s punk legends Discharge. Long seen as a band which has paved the way for the development of grindcore, these Stoke-on-Trent veterans have been indispensable to the world of extreme metal. Forty-five years down the line, they still pack an impressive punch.

Their indispensability is reaffirmed by Eyehategod’s legendary frontman, Mike Williams, who exclaims: ‘Did everyone see Discharge? Discharge! I don’t even know who else is playing this festival.’ Eyehategod follow Discharge on the Sophie Lancaster stage, bringing the smokin’ NOLA vibe to Catton Park. Mike Williams is brilliantly erratic and honest, questioning: ‘What is this festival? Bloo-? Blood? Bloodstock?’, with a little smile and nod when he finally gets it right. His moody, hateful growls ring over slow sludgy riffs, he cries ‘Go to work, go to school, Every day, every day, every day, every day’ (Every Thing, Every Day). The painful reality of everyday life can sometimes be lost in metal, amongst all the Satan worshipping and Donald Trump beheadings – bands like Discharge and Eyehategod mark a welcome diversion for Bloodstock this year.

For those willing to take the risk, we have Bloodstock’s ‘mystery band’ over in the Sophie Tent. With 20 minutes still to go before the set kicks off, the crowds are already spilling out of its seams, with lines of people five-to-six deep just waiting on the outskirts for the small chance that someone will leave (probably fearing for their life in such a confined space on a day like this) and they may get one step closer. The ‘mystery band’ are, as widely predcted, the California metal kings Machine Head, who are met with great jubilation. Back in the Sahara Desert (ie. Ronnie James Dio), thrash giants Testament take to the stage with inspirational frontman Chuck Billy as lively and powerful as ever. You know it must be really very hot when a Californian says: ‘I wish I had a firehose, and I could squirt you down. Sorry, I apologise.’ With a rumoured fourteenth album due to land on shelves next year, Testament show no signs of slowing down anytime soon with this fiery performance.

As, finally, the temperature dips below 30 and the clouds draw in, it’s time for some Polish blackened metal. A long eerie build up, with the harrowing vocals of a lost woman. And then … an explosion of fire, fog and light. Behemoth dive into ‘Ora Pro Nobis Lucifer’ but are instantly plagued by technical issues with a distorted mic for Nergal, which eventually cuts out altogether. The silence persists for over five minutes, eventually returning for ‘Wolves Ov Siberia’ – everyone cheers. Apart from this rocky start, Behemoth put on a black metal show to remember – brutal, terrifying, and brilliant. 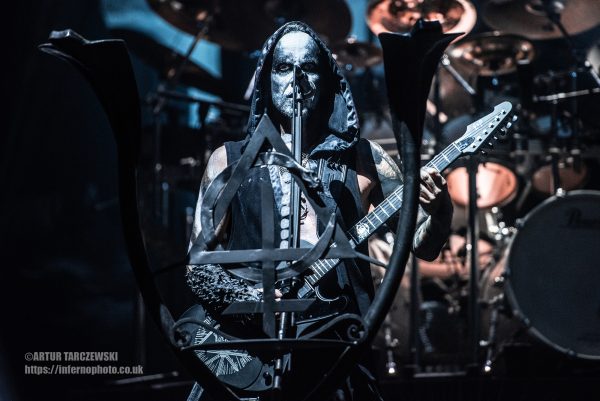 As the sun rises, we are promised another scorcher – and there are several extra pairs of drumstick legs and arms moving around the Catton Park arena this morning.

‘Supergroup’ Cage Fight takes on the Sophie Lancaster stage early on in the day. TesseracT guitarist James Monteith and bassist Jon Reid formed the band in early 2021, bringing in drummer Nick Plews and singer Rachel Aspe, formerly of the band Eths. A thrash metal sound with a punkish edge, the band is majestically pulled together by Aspe who is all blue hair, red fishnet, safety pins and slogans. Their self-titled debut album came out mere months ago – and they’re already marking themselves as one to watch. Reading’s Sylosis get the pit going over on the main stage with their progressive metalcore sound, with Connor Marshall’s (also of Conjurer) bass-playing always going down well. A much-anticipated band this weekend is Ukraine’s Jinjer. This is a band whose performance today has been postponed for two years, due to Covid-19. And then the prospect of a 2022 Bloodstock was thrown into uncertainty after the Russian invasion of Ukraine, with the band releasing a statement saying they had ‘paused’ their career to focus on the war effort. To the delight of fans around the world, in May they announced that they had received permission from the Ukrainian Ministry of Culture to leave Ukraine and tour as ambassadors of the nation. They enter onto the Ronnie James Dio stage to Ukrainian flags being waved by fans, and blue and yellow inflatables bouncing around the crowd.

Frontwoman Tatiana Shmailyuk, dressed in a leather ensemble with a tight high-ponytail that shows she means business, thanks the UK for its help with humanitarian aid and ‘standing with Ukraine’. Off the back of their most recent album Wallflowers (ironic – as there are no such wallflowers on this particular stage today), released in 2021, Jinjer’s performance is high-powered and emotionally-fuelled.

Dimmu Borgir take to the main stage slightly later than scheduled, presumably down to some more technical difficulties. Entering through a sea of mist and an unsettling drum/chant combo, with the eerie words, ‘We’re all cursed on this black magic night’, ringing across the crowd, frontman Shagrath begins his ‘oh-way-yo’s’ – getting the crowd going. Always captivating, Shagrath is superb at waving his horned skull and even treats us to a solo on a special drum that’s wheeled out. The Norwegian black metal legends have arrived. Following on with more Nordic black metal are today’s headliners, Copenhagen’s Mercyful Fate. King Diamond’s Satanist cult is the stuff of folklore – having been performing the unique concoction of gothic horror visuals, groovy riffs and falsetto screams for more than 40 years, the Danes were amongst the first to use ‘corpsepaint’ visuals, but unlike other black metal bands – took grounding in 1970s hard rock. This has created a truly unique sound. But Mercyful Fate are just as much about the performance and theatrics – we are treated to a true play, a pantomime. There are even costume changes. Waving his crucifix, wearing a terrifying crown, blood pouring down his face, screaming the words to the likes of ‘Come to the Sabbath’ and ‘Melissa’ – this was a superbly spooky way to end the evening. The final day has arrived, bringing with it grass which has turned into an Arabian desert. The queues to the water taps are as long as ever, while the medical tent bursts with those who’ve finally succumbed to the piercing rays. The goths are going strong, with their gallons of sun cream and Victorian parasols. Today is also branded ‘Wear Pink for Sophie Lancaster’, which offers a nice break from black for the bearded chaps prancing around in fuchsia tutus. Talking of which, nice and early on the Sophie Lancaster stage are black metal Spaniards Noctem, hailing from Valencia.

Going for over 20 years and with a brand-new album Credo certe ne cras under their belts, this is a wonderfully sinful set to kick off the final day.

Over on the Ronnie James Dio stage are black metal legends Venom Inc, frontman Tony ‘Demolition Man’ Dolan paying tribute to the late Trevor Strnad of the Black Dahlia Murder, who were due to play Bloodstock this year. This is a high-energy performance from the veteran Geordies (with guitarist Jeffrey ‘Mantas’ Dunn even popping a string) filled with 70s style riffs associated with the first wave of black metal, and a cheekiness that can only come from a bunch of English northerners.

Dark Funeral, following shortly after, are no such cheeky chappies. The Swedes from Stockholm are ferocious with fast, angry songs about hell and the apocalypse, exploding into the sun-drenched arena with ‘Unchain My Soul’. They conjure scenes of desolation and strong emotion with tracks such as ‘When I’m gone’, taken from the latest album We Are The Apocalypse. Either way, Dark Funeral are here to fill all your satanic needs. 1980s post-punk pioneers Killing Joke rock up soon after, with the irascible Jaz Coleman looking striking in a black boiler suit and impressive mop of hair – entering the stage to the sound of bagpipes: ‘I am happy to see you all… We are at the beginning of World War Three,’ he declares. Founding member and bassist, Youth, wears an orange floral shirt and a visor – together, they appear an utterly bizarre double-act. The band’s delicious concoction of goth rock and synth-pop stands the test of time, with Coleman’s voice particularly strong this afternoon. Overlapping this set, over in the Sophie Lancaster tent, we are treated to Strigoi’s blackened doom sound. Fronted by Gregor Mackintosh (also guitarist of Paradise Lost of course), Strigoi’s sophisticated sound is filled with intricate guitar work, moody melodies and hardened breakdown. It’s just a shame their audience was a little light on the crowd, with the lure of Jaz Coleman proving key competition.

One band that did not fail to pack out the Sophie Lancaster tent was the always glorious Belphegor. We’ve seen some great black metal bands over the past three days, but you sense that no one really means it quite as much as Belphegor. There’s an empty stage, regency-style music ringing out – as though we are entering a 19th Century ballroom. The only things hinting as to what’s to come are the inverted crosses and smoking candles. We deep dive into the devilish ‘Baphomet’ and the crowd erupts – at least, as much as a crowd are able to when packed in like a can of sardines. As the sun dawns, we reach the end of another (particularly sweaty) Bloodstock. With a new album, Omens, just around the corner, Virginia’s favourite sons Lamb of God close proceedings on the Ronnie James Dio stage to a sea of mosh pits and clenched fist adulatory salutes.

Next year, let’s just pray to Lucifer for some snow. ..