BLOODSTOCK is hurtling towards the Xmas season at a rapid pace, but planning for August 2023 is still in full swing.  The Deposit Scheme is also ready to go, so if you’ve not already grabbed your ticket, secure yours now by signing up and make paying for your ticket a little more manageable. First though, here’s eleven new bands to get you excited for next August….

Landing a slot on Friday’s Ronnie James Dio main stage are Phoenix Arizona thrash icons SACRED REICH. Having dropped Awakening in 2019, their first studio album in 23 years, they’ve wasted no time since 2021 hitting the road (most recently with Sepultura).  Check out the rifftastic video for the album’s title track, above.

BLOODSTOCK also welcomes HEAVEN SHALL BURN, in their first ever UK festival appearance! The well-respected German metalheads are warming up for BLOODSTOCK touring with Trivium in early 2023.  Watch the video for ‘Übermacht’ to get in the mood, from their album Of Truth And Sacrifice.

Also bagging a Friday main stage slot are electro nu-core squad, SEETHING AKIRA, whose new album Nozomi just landed. Get up to speed on their sound via the lyric video for ‘Punishment Instructions’.

Saturday’s main stage sees NOLA swamp kings CROWBAR join the fray.  Having released their latest album, Zero And Below earlier this year to much acclaim, expect to hear brand new tracks like ‘Bleeding From Every Hole’ alongside their classic riffs.

Also snagging a Saturday slot are hotly tipped London metal trio, URNE. Snapped up by Candlelight Records, wrap your ears around their killer track ‘Desolate Heart’ if you’re not yet familiar with them. You’re welcome.

Sunday on the RJD main stage sees the return of ALL HAIL THE YETI, after having to cancel their 2022 appearance due to unforeseen circumstances. The SoCal sludgemeisters released their latest collection, Within The Hollow Earth last November, featuring the fan favourite, ‘Headless Valley’.

Also grabbing a Sunday main stage slot are rising metal squad DEAD LABEL, who are fast becoming festival favourites. Check out their video for ‘R.E.D’ to see them rocking those crowds!

Lastly on Sunday, we welcome UUHAI, all the way to Catton Park’s main stage from Mongolia!  Watch their cinematic video for ‘Uuhai’ here.

There’s plenty of action over at the Sophie Lancaster stage too. Friday welcomes heavy Swedes BROTHERS OF METAL. Perhaps they’ll treat us all to a live rendition of ‘Yggdrasil’, from their Prophecy of Ragnarok album? They’re also recording a new album right now!

Gore grind merchants GUTALAX jet in from the Czech Republic to liven up your Saturday and the video for their track ‘Shitbusters’ is sure to put a smile on your face.

Not slacking off as the weekend draws to a close, Sunday adds supergroup COBRA THE IMPALER. Not one to miss, see what they’re all about via the absorbing video for ‘Mountains’, from their Colossal Gods album and then go listen to the rest of it!

Joining them on Sunday are North Yorkshire’s INVISIONS, bringing a welcome dose of melodic metalcore/post-hardcore, potentially including the track ‘Annihilist’ from their album Deadlock, out now.

This coming Monday 21 November, the very popular Deposit Scheme will be available for sign ups!  Payments are spread across 6 months, making it even more manageable to pay for your ticket in instalments. An initial payment of £34.50 is due upon sign up (which you can do at any time before 21st Feb), then five additional payments of £27.50 will debit your bank account on 28 Mar, 28 Apr, 29 May, 28 Jun, with a final instalment on 28 Jul.  Sign up to the scheme here.

Not only that, this year, BLOODSTOCK is excited to welcome back Poland and Norway events and thrilled to bring in the former Yugoslavia countries, which will be hosting inaugural heats in Slovenia, Croatia, Serbia and Macedonia.  The final will be held at the Lomljenje Metalom Open Air event in Croatia.  Full details of all venues and who to contact to enter in each region, can be found here or on Facebook.  Heats kick off very soon – apply NOW so you don’t miss out! 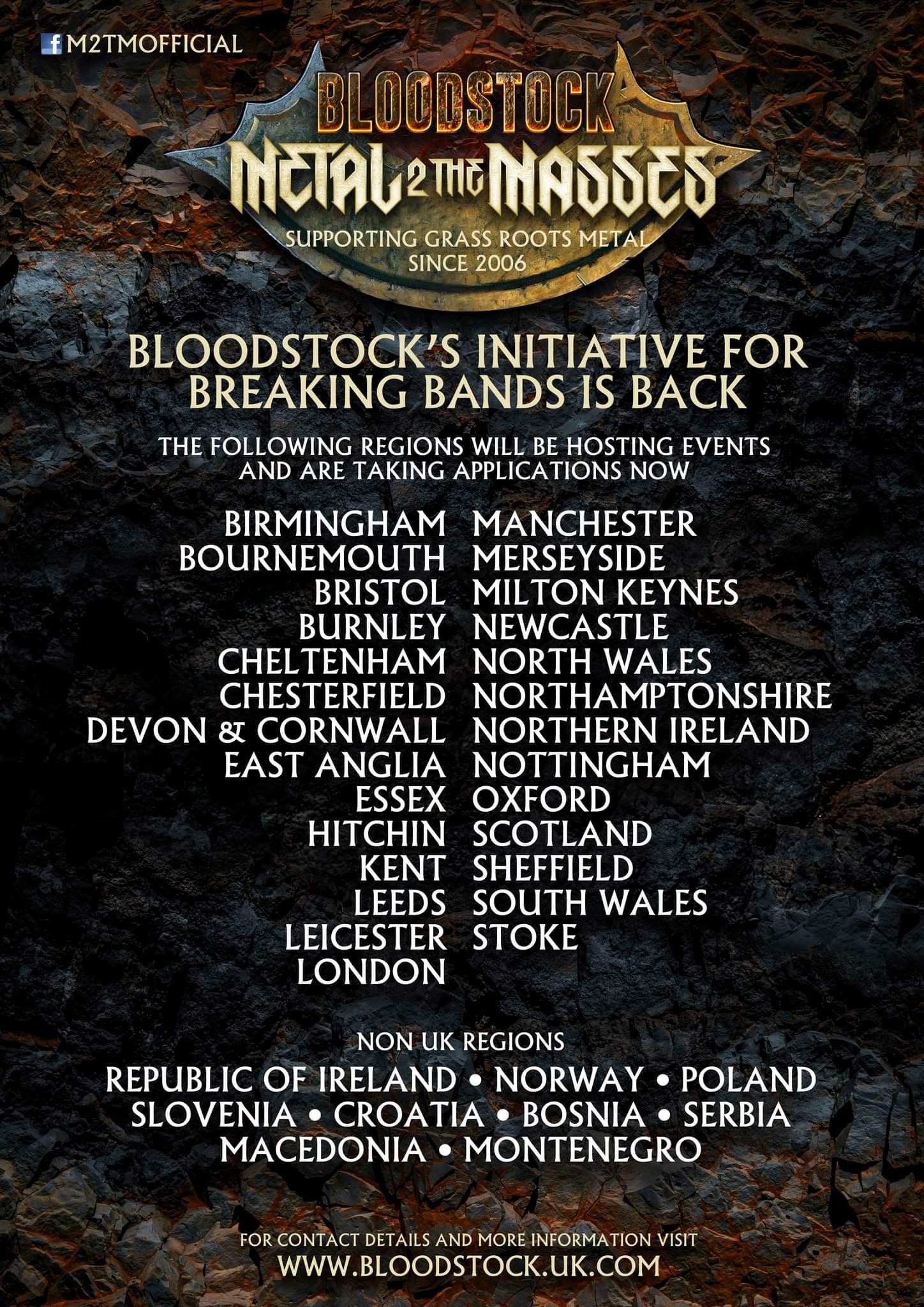 BLOODSTOCK’s 2023 Ronnie James Dio main stage headliners are KILLSWITCH ENGAGE and MEGADETH, with the third to be announced in the coming months.  Also appearing are IN FLAMES, DEVILDRIVER, ANTHRAX, BIOHAZARD, SEPULTURA, WHITECHAPEL, FIT FOR AN AUTOPSY, UGLY KID JOE, DECAPITATED, GATECREEPER, ZEAL & ARDOR, KING 810, UNTO OTHERS, NONPOINT, CHURCH OF THE COSMIC SKULL and TROLLFEST.  Many more are yet to be announced.

With tickets selling faster than ever for 2023, all VIP packages and campervan passes are already sold out. Grab your weekend tickets now at the ticket store.

BLOODSTOCK will take place at Catton Park, Derbyshire on 10-13 August 2023. 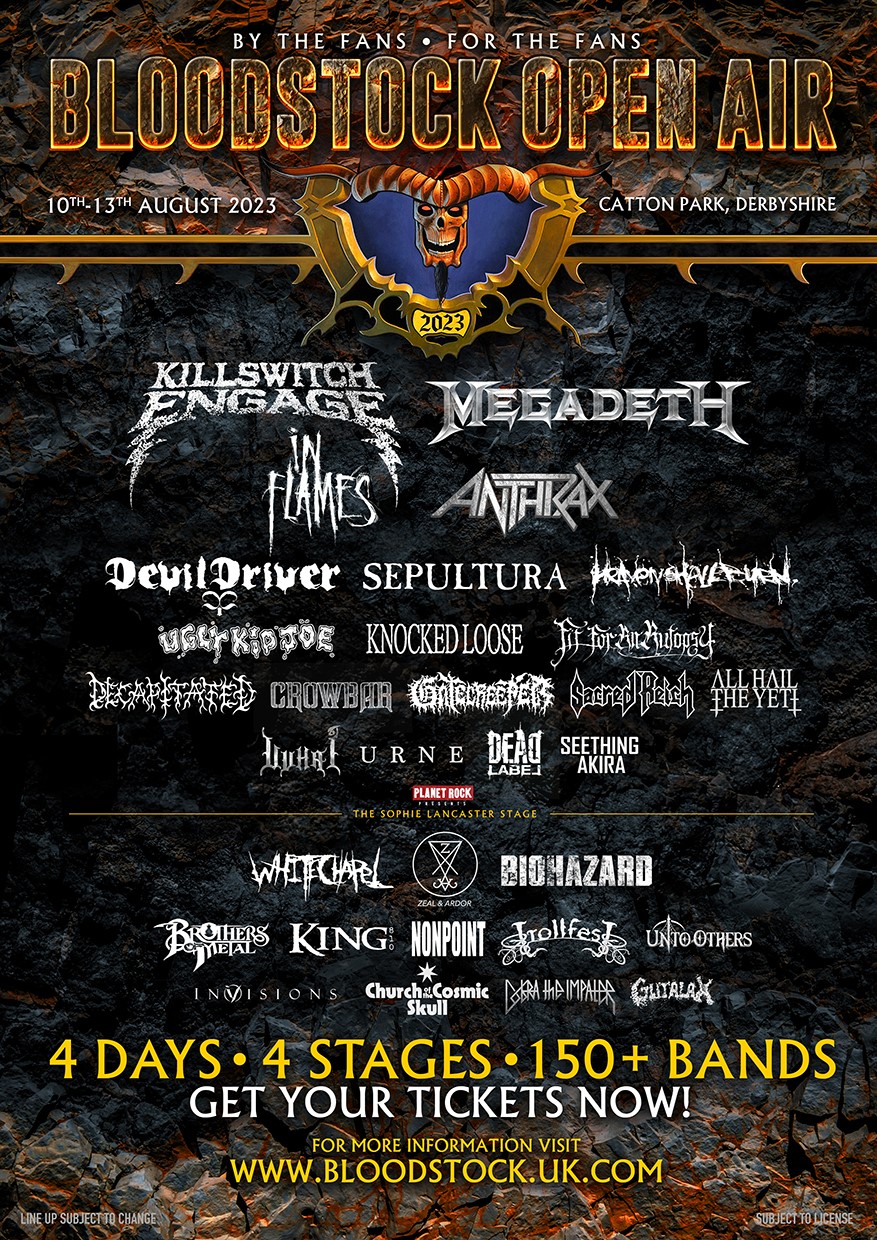