From the corpse-littered basement of your friendly neighbourhood psychopath…

With bands such as Ascended Dead, Ghoulgotha, Shroud Of The Heretic, Necroven, and Altars to their name, Sweden’s Blood Harvest waste little time. When they hear a band with potential, they are quick to insist that they should take on the responsibility and the privilege of bringing them to the attention of the world.

And so in that tradition, MR’s sucker for extreme metal punishment Jason Guest takes on two more releases:

For more from Blood Harvest, check their Website, Bandcamp, or Facebook pages. But for now, stick around and get pinned to the wall…

Five years in and Lago’s debut album has arrived and it is solid. Like Morbid Angel, Origin, and Immolation, toeing the line between technicality and brutality, Lago are perched on the right side of heavy churning out some seriously good death metal. The production potent, the riffs caustic and catchy, the drums cannon-like, and the vocals guttural and torn, there isn’t a bad track on Tyrrany.

Compositionally, Lago have nailed it. Each track refined, they know when to trade the trem-picked melodic riffs for heavily demented chords and when to lean in with the violence and when to dig in to a grinding groove. The varying approach to the vocals works very well, providing enough diversity in their sound not just to maintain interest – a gimmick so many fall foul of – but to give the tracks character, depth, a voice of their own. Combine this with the excellent lead work and clean-yet-heavy production and you’ve got a death metal album well worth blasting the crap out of. 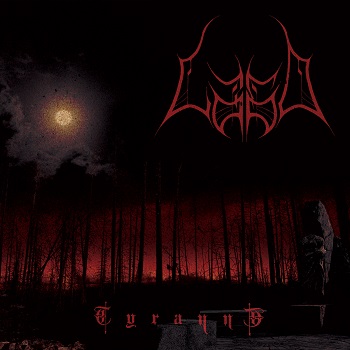 Following the impressively haunting intro ‘Dawn of Horror’ – sounding like some movie score the band recorded with a microphone pressed right up against the TV speaker – Polish duo Pregierz very quickly get down to business, the bounds between death and black metal collapsing in a barrage of distorted-beyond-distinction riffs and muddily hard-as-nails drums. With an erratic and murderous vocalist spewing ritualistic expletives over the pandemonium and extracts from horror films strewn across it, Blood Sanctions sounds like what the corpse-littered basement of your friendly neighbourhood psychopath looks like.

But like the butchered body parts that fill that basement, you could take any of the riffs here and stick them together in any arrangement and be pushed to tell the difference. Though it’s messy and the tracks tend to quickly blur into one with any shade of individuality disappearing beneath the mire of muck and massacre, this twenty four minute mass of blood, bone, and freshly torn flesh is a gory and grotesque pleasure. Flawed, yes, but abominably addictive. 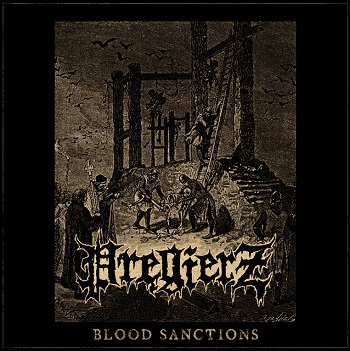