Bringing unto us many a slab of sloppy, slobbering, and seething death metal, Swedish label Blood Harvest Records have featured in these pages many a time (click here for a list). Today, MR’s Jason Guest takes on two tapes and one 7” release:

If you want to find out more about Blood Harvest Records, you can check out their Website, give them a listen on Soundcloud or on Bandcamp, and for up-to-date, erm, updates, go and ‘Like’ them on Facebook. In the meantime, back to the slop, slobber and the seething…

Released last September last year, Ascended Dead’s debut 7” Arcane Malevolence (reviewed here) was – and remains – a pummelling, raw, and primitively ruthless piece of work that saw the band refine their combined skills significantly since their 2012 debut demo. With material intended for splits that presumably came to no fruition impatiently gathering dust in the vaults, Blood Harvest has stuck them together on a cassette and called them The Advent.

The first four tracks are the most recent (recorded July 2014) and are as potent, destructive and cacophonous as the Arcane Malevolence material. The difference between these and the remaining two tracks (recorded February 2013) is as you’d expect. In these earlier tracks, it’s the band’s fire and fury in evidence, whereas the newer material feels more refined. Well, about as refined as this rabid and raw mess of cave-recorded devastation can be anyway. What’s apparent with this release is that rather than digging up old material and living on past glories, Ascended Dead should be delivering an EP or an album. what we’ve heard so far is evidence enough that it should be a beast of a record. 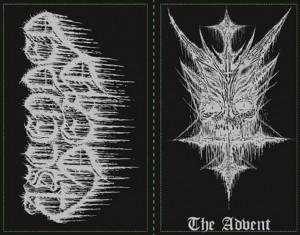 Maleficence – Journey to the Depths (Tape)

Self-released in 2014 and now getting a cassette release, Journey to the Depths is an evil portent of what’s to come from Maleficence’s debut 7” EP soon to be arriving through Blood Harvest. ‘To Hell and Back’ opens the blackened thrash assault, its harmonically-doubled trem-picked riffs clamber their way through a mountain of malevolent muck and madness. Pinned to the nail-gun-stuck-on-rapid-fire drums by a fat, distorted bass, and with a suitably evil and menacing vocal spewing all kinds of bile, this track revels and rejoices in old school filth and ferocity.

Dense and disturbing, the demonic ‘Primitive’ and ‘Blood Rituals’ move inexorably forward, the tracks slamming into hellish high-speed grooves splattered with vehement lead breaks, lacerating vocals and damning drumbeats. And with the occasional pause for a brief, half-tempo instrumental interlude across the tracks, their substantial weight is further increased. Of the four very impressive tracks, of them all, closer ‘Drowning in the Styx’ is a beast and well worth the asking price alone. Squalid, fetid, violent and rotten to its core, this is the work of a band to keep a very close eye on. 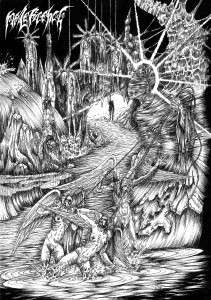 Appearing in 2014 on cassette, Blood Harvest is releasing this ugly baby on 7” vinyl. The murky world that VoidCeremony reside in is rendered perfectly in the murky production of this fiendish four-track release. The bludgeoning and ruthlessly sharp guitar sound gives the savage riffs the heft they demand; the drums have a bite that is both vicious and viscous; and the monstrous vocals emanate from the void within which this earth-shattering ceremony takes place. As for the tracks (who would dare call them songs!), they are raw and revolting.

The opening (sort of) eponymous track crashes in and very quickly shifts the tempo up, simultaneously cranking up the filth and the faeces for a sloppy, slavering and sickening slab of black/death metal. With a structure that shifts before it settles, the band thundering unrestrained through a plethora of feral riffs ,‘Profane Accumulation Of Execrable Reverence’ is harrowing. The title track is ruthless. And so is ‘Lunar Qliphoth’. VoidCeremony continue to vomit new levels of bile and depravity into both tracks, the beautiful acoustic coda that closes the last track slamming the coffin lid shit on hope, faith, and sunlight. Foul, hostile and hideous, described as a “diamond in the rough” in the promo material, this band and this gem are far too dark and unrefined to shine. And all the better for it too. 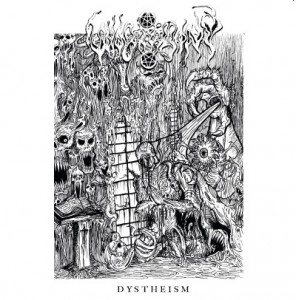