Having Metallica cover one of your songs in the mid-80’s could place a band directly in the spotlight, and that’s exactly what happened to Leicester’s Blitzkrieg. When those San Fran thrashers put ‘Blitzkrieg’ on the flip of their 1984 12”, ‘Creeping Death’, it caused a whole new generation to discover the joys of the NWOBHM, and Blitzkrieg in particular. In response to the new found interest, Blitzkrieg reformed in 1984 and released their (long overdue) debut album the following year. Inferno: The Complete Recordings Vol 1 collects their four studio albums from that era, along with the ultra-rare Blitzed Alive cassette to comprehensively document the first half of an amazing career.

In a case of burning brightly but briefly, Blitzkrieg originally split in 1981after releasing just one slab of vinyl (the ‘Buried Alive’ 7”). So, when they rose from the ashes it was with the intention of recording the album they should have released during their original incarnation, and the result was A Time Of Changes, and here’s the rub; it actually sounds like it was recorded at the height of the NWOBHM (and not at its tail end). That’s partly because of the age of the songs, but also the rudimentary production, which gives things a nice rough edge (always an attraction of the NWOBHM). ‘Ragnarok’ is the scene setter, and as introductions go, it’s a good one, but it doesn’t prepare us for the musical explosion that is ‘Inferno’. Chock full of solid riffs, gnarly solos, pounding drums, and ear-splitting screams, it encapsulates all that’s good about raunchy rock n’ roll, and it is still the first song!

With a riff culled from Focus’ ‘Hocus Pocus’ (although amped to the max) ‘Blitzkrieg’ has grown into its own monster, and the version included here differs slightly from the version which appeared on the B-Side of their 7”. In a strange case of musical cannibalism, it’s hard to know if the band even heard Metallica’s version, but this rendition certainly has added vim and vigour. Elsewhere, the band pay homage to Kiss with a cover of the Satan song ‘Pull The Trigger’, then deliver the riff-tastic ‘Hell To Pay’. Signposting what was to come later in their career, the title track is an epic number of several suites, and it’s almost an organic entity as it shapeshifts from one form to another. Overall, A Time Of Changes is a solid debut that, if released a few years earlier, would be viewed as a cornerstone of the genre. But the title proved strangely apt; by the time it was released in ‘85, the NWOBHM had been superseded by thrash, and times had indeed changed.

This disc adds six bonus cuts, the first three of which are from their 1980 demo tape and feature raw (but not sloppy) versions of ‘Blitzkrieg’, ‘Inferno’ and ‘Armageddon’. Also included are both sides of their 7”, along with another version of ‘Inferno’, this time from the Neat Records sampler, Lead Weight.

For those of us not lucky enough to see Blitzkrieg live circa 1980, we can only imagine what visceral power they wielded. However, giving a good indication of their live prowess is the Blitzed Alive cassette. Capturing the band in and around Newcastle, it finds the band powering through six (soon to be) classic cuts, along with an air-raid siren introduction that serves as fair warning to the faint of heart. The first thing to note is that the band became much heavier in the live environment, with ‘Armageddon’ being particularly earth-quaking, and a more Purple-than-Purple run through of ‘Highway Star’ crashing through the gears. The rudimentary nature of the analogue tape only adds to the authentic live feel, and is a tantalising taste of Blitzkrieg in their prime.

Much has been made of punk’s impact on the NWOBHM, and while that might be true, I’ve always detected more progressive rock influences (albeit infused with energy). Compiled from several demos recorded in 1981, Unreleased Tracks could be construed as being powered by a certain punky pertinaciousness, as the nightmare-before-Christmas ‘Santa’ illustrates. But the musicianship is all metal, and the unruly ‘Too Wild To Tame’, slated to have been their next single, hints what might have been if the band hadn’t split later in the year. Those progressive leaning are very much in evidence on ‘Vikings’, the elongated ‘A Time Of Changes’, and a reworking of Bach’s ‘Tocatta’ with its shades of ELP. By their very nature, these cuts have a rawness that was filtered out of their debut album (which may be a good or bad thing, depending on your taste) and can only hint at what Blitzkrieg could have been were it not for their untimely split.

By the time Blitzkrieg released their sophomore album, Unholy Trinity in 1995 only vocalist Brian Ross and drummer Sam Taylor were left from the line-up that recorded their debut (this shift in personnel would go on to define their career). However, these shifting sands seemed to reinvigorate the band and Unholy Trinity is fuelled by a similar energy that drove their first album forward. Nevertheless, this release is tethered to the past, and that’s immediately obvious by opening shot ‘Hair Trigger (Pull The Trigger Part 2)’, a continuation of the track which illuminated A Time Of Changes. The album contains a couple of cuts reworked the band’s past; ‘Calming The Savage Beast’, and rather confusingly, a track which appeared on the previous album, ‘Take A Look Around’.

Unholy Trinity had been recorded a few years earlier, and was languishing in the vaults before it finally saw the light of day, so the inclusion of the older cuts doesn’t seem so strange. But this record really sparkles with the fresher tracks; ‘After Dark’ with its powerhouse drumming, and the ode to Jack The Ripper ‘Unholy Trinity’, a song that slashes the air like a blood-stained, steely knife. Featuring two metal heavyweights colliding, a cover a Venom’s ‘Countess Bathory’ makes a welcome appearance, and even more so as it features a guest vocal from Cronos. His voice works rather well with Brian’s, and the latter’s sweet tone ensures it’s less abrasive than the version which appeared on Black Metal. With hardly a duff note amongst its 17 tracks, Unholy Trinity marked a welcome (long overdue) return for Blitzkrieg.

As with previous Blitzkrieg albums, 1996’s Ten found the band delving into their past, this time taking material from 1991’s Ten Years Of Blitzkrieg (an EP originally released to celebrate 10 years since the ‘Buried Alive’ 7”). However, it’s testament to the band’s accomplishment that it is the newer tracks which stand up best. One of those is the all-too-short introduction ‘Cavo D’Oro’, a track of Sabbath heaviness, that contains a riff which is the stuff of Iommi’s dreams. That’s quickly followed by ‘Fighting All The Way To The Top’, a song which brought the band’s sound bang up-to-date, with plenty of gang vocals, and a production that put a nice twang on the bass, it veered into thrash territory, while retaining the band’s core essence.

In addition to the five new songs, Ten features four from the Ten Years Of Blitzkrieg EP plus a reworking of their famous B-Side, now titled ‘Blitzkrieg ‘96’. On its release Ten did cause some consternation amongst fans, and it is hard to reconcile why they released an album weighed so heavily with previously released material, and it still seems a strange decision, especially when another EP would’ve sufficed. Having said that, Ten does hang well together as a collective whole, it flows smoothly like a regular album, but its fairly brief running time (39 minutes) means it is overshadowed somewhat by the epic Unholy Trinity.

The band’s fourth album, The Mists Of Avalon, released in the summer of ‘98, was something of a rebirth for Blitzkrieg. Comprised of all new material, it seemed as if they had finally broken away from the weight of their past, and they were making the record they’d always wanted, rather than what was expected. However, they hadn’t completely severed their ties, and those progressive tendencies I alluded to earlier, come to the fore on the nineteen-and-a-half-minute title track, ‘The Legend’. Sometimes listening to lengthy tracks can be like pulling teeth, they’re often vehicles for musicians to showcase their virtuosity, (rather than for listening pleasure) but when they’re done right, they can alter the very fabric of time so they pass in the blink of an eye, and ‘The Legend’ is one such track.

While ‘The Legend’ explored Arthurian themes, the remainder of The Mists Of Avalon is comprised of shorter rockers that turn their sights on topics such as Doctor Who (‘I Am The Doctor (Who Are You?)) and vampires (‘Another Interview?’). In short, the kind of themes you want to hear on a heavy metal album, and it’s only the tribute to Princess Diana (‘Princess For The World’) that lets the side down. For whatever reason, The Mists Of Avalon is often the most overlooked album in the Blitzkrieg canon, but hopefully its inclusion on this box set will rectify that. 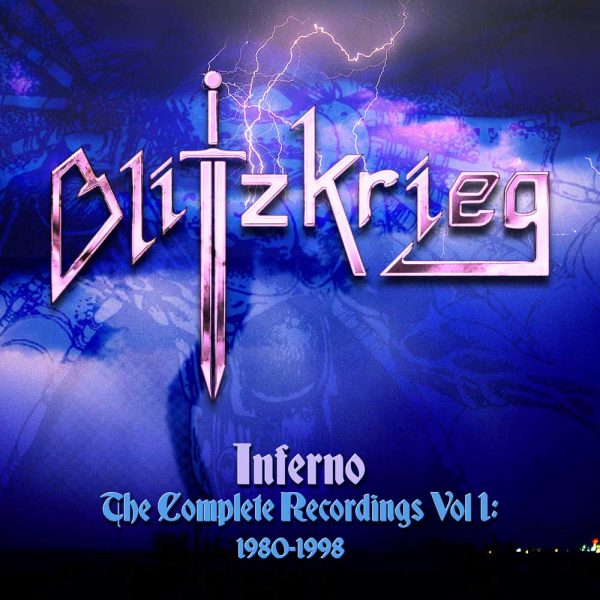