So, we have good news and bad news. Good news is Southern rock legends Blackfoot are back, and with a brand new studio album to boot. But hold your horses pardner, wait till I’ve given you the lowdown. This is a new young band called Blackfoot – formed, mentored and produced by original band founder and main man, Rickey Medlocke (he even goes as far as overseeing songwriting and playing a spot of guest guitar). They are, and I quote, “carrying the torch for the next generation”…we shall discuss this later.

The music? Fairly traditional American hard rock with a Southern, bluesy lilt. Cars, girls, long roads and ‘The South’ feature heavily. Tim Rossi’s vocals do the job but are somewhat bland and characterless. The guitars roar and chug away surprisingly heavily but, then again, Medlockes crew were always heavier than the rest of their Confederate peers.

The title track is an obligatory ode to the South. You can feel Medlocke behind this one, plus the ballsy female backing vocals (possibly not the best choice of adjective) give the song a veneer of style. The raging guitars remind me of ‘Slave To The Grind’ era Skid Row. ‘Call Of A Hero’ has heavy riffery and slide geetaw redolent of Zakk Wylde’s contributions to Ozzys ‘Mama, Im Coming Home’.

‘Whiskey Train’ has plentiful cowbell and a biker rock groove – Rossi and Rick Krasowski trading some mighty licks. Indeed, the interplay between the two guitarists is dynamic throughout and should absolutely fly live. A few of these rockers sound slightly inbred – it’s difficult to tell them apart but they’re having fun.

The bands heavy yet faithful cover of CSNY’s ‘Ohio’ is an oddity. It’s a song very much of its moment and Neil Young pretty much nailed it the first time. What was once a spine tingling howl of anger and frustration is now a sepia tinted singalong. There’s plenty to be pissed off about now, why not write a new protest song? And why the “Southern man don’t need him around” shoutout at the end? Is it a dig at Uncle Neil or a nod to Ronnie Van Zant? Either way it jarred.

The big ballads, while enjoyable, are lyrically cliched to say the least. All the dusty, mans world tropes are wheeled out of storage (where they’ve been since the early 90’s). We are told to “march to the beat of our own drum” and “walk a mile in my shoes”. “Every man must travel down his own road” apparently, oh, and that road just has to be a “lonesome highway”. There is also, and I kid you not, a “cowboy riding in a setting sun” – it makes ‘Every Rose Has Its Thorn’ sound like Aristotle!

So, the discussion. Does a band with no original or long standing members (in fact, they probably weren’t even alive during Blackfoots prime) still actually count as that band? Would Medlocke have been better served letting Blackfoot exist as a fond memory and putting together a band with an entirely new name and identity? Or is trading under an established brand easier and more lucrative? It’s not for me to say. The album itself is good but it is manufactured and polished. Cunningly machine tooled to be taken on the road. Epic twin guitar wig outs are factored in – ready for that ‘Freebird’ moment. There are more namechecks of cities/states than in any album I’ve ever heard (cue the cheer when they hit and name tour town). It lacks the gonzo glory of Blackfoots late 70’s/early 80’s run of minor classics but it’s a good, solid, Southern hard rock album. You takes your choice. 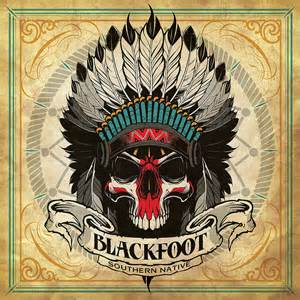