Eight years have passed since Black Stone Cherry released their self-titled debut, a radio-friendly hard rock album that also boasted some hefty riffs and a distinctly bluesy southern flavour. They were a heavier, less annoying alternative to Nickelback, with simple but arresting songs free of pretension and built with muscular, made-for-volume production values. Their following two albums continued in the same vein but, predictably, with diminished impact. Nonetheless, the Kentucky outfit have garnered outstanding support worldwide, not least in the UK, where they played to a huge, enthusiastic crowd at Download 2013. And so with the release of Magic Mountain, expectations are neither sceptical nor particularly ecstatic: Black Stone Cherry haven’t really made a bad album, but will it be better than the last two?

Such thoughts are soon swept aside as soon as the thumping hard rock of opener ‘Bad Luck & Hard Love’ kicks in; the first time you hear Chris Robertson scream ‘It’s my life / and it’s ONE HELL OF A RIIIIDE’ into that kick drum-powered riff it almost makes you feel as though he’s inviting you along. No-nonsense fist-throwing rock songs have always been BSC’s biggest strength, and there are many more here: the blues-tinged ‘Blow My Mind’ continues the hard rock thunder; ‘Dance Girl’ contrasts mid-tempo metal with some aptly funky rhythms; ‘Never Surrender’ is pure succinct fury. It doesn’t take long, however, for the established formula to become clear, a formula which also dictates there should be some slower tracks – represented here by the sunny country rock of ‘Hollywood In Kentucky’ and the Americana-tinged, misty-eyed closer ‘Sometimes’ – along with some likeable (if less memorable) tracks in between.

Some of the album’s most interesting moments, unfortunately, turn out to be the most frustrating: when a manic bluegrass run breaks out at the end of ‘Hollywood’, or when hell-for-leather Motörhead speed kicks in on ‘Fiesta Del Fuego’, you’re tricked into thinking BSC are trying out something new, but instead they swiftly abandon them as novelties best saved for outros. They’ve clearly got a broader musical palette at their disposal, so why not use it?

It’s on this level where Magic Mountain disappoints the most: BSC have clearly got the chops to push themselves to other planes, but instead they carry on making the same noises from the safety of their comfort zone. Given the slight dip represented by the last two albums, it would be easy to say that album number four is a triumphant return to form; it’s just a pity that Black Stone Cherry didn’t return any different. 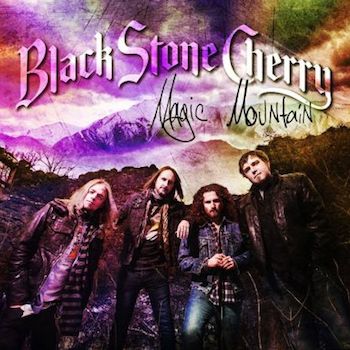