I have to admit when Warwick was announced as the new Lizzy front man I had my doubts about his compatibility with those classic tracks, but he above and beyond banished my doubts and not only did he blow me away with his versions of the Lizzy classics he has gone onto be the perfect front man for the Black Star Riders. The Killer Instinct, as you would expect, sounds exactly like you would think a Thin Lizzy album would sound in 2015, but this is far from a tribute album and definitely more of a continuation of the Lizzy legacy.

The majority of songs here have that defined Lizzy stamp, that Irish folk rock slant that makes them stand out and remain unique in the overpopulated classic rock genre. There are a couple of tunes that stray away slightly from the obvious Lizzy trademarks, but it all remains very much within the parameters of the overall feel of the album and actual evokes some of Warwick’s solo work, which took a lot of inspiration from Irish folk rock and his Northern Irish roots.

It’s a solid album which follows on grandly from their debut proving they aren’t a one trick pony. It’s got some great rockers which will be perfect for the live arena like the bass heavy and funky ‘Sex, Guns and Gasoline’ and the anthemic ‘Soldierstown’ which has some chant vocals and a chorus which will have live audiences singing along and punching the air in time to the chants! Lizzy were always gifted with the ability to write songs that translate perfectly live and the Black Star Riders have carried that tradition on with ease.

It’s the radio friendly catchy numbers that really captivated me from the first play most notably mid-tempo rocker ‘Finest Hour’ which is very melodic and evocative and one of the least obvious Lizzy inspired tracks. Alongside the catchy classic rocker ‘Killer Instinct’ and the driven hook-ridden ‘Through The Motions’ they implant unforgettable choruses into your consciousness and give the album an immediate and enjoyable impact.

I’ve always been a big fan of Warwick not only with The Almighty but with his heartfelt and poetic song writing on his Irish inspired solo work too. His vocal style suits the band to a tee and he emulates Lynott’s vocal style well, whilst always putting enough of himself into the songs for him not to border on becoming a Karaoke singer. His influence can been heard distinctly in the song writing and a few tracks do evoke memories of his solo work and allow him to stray away from traditional Lizzy vocal trademarks on occasion. If you love Thin Lizzy, Gary Moore or indeed the debut Black Star Riders album you will find this new opus is pants-wettingly awesome! 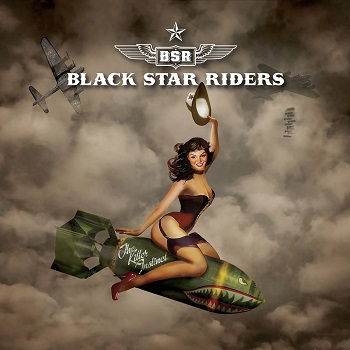