It’s been 35 years since Black Flag were last on these shores. After a sold-out gig in London last night, here they are in Birmingham playing in the very-nearly sold out The Mill. The band walk on stage, Isaias Gil takes his place behind the kit, Greg Ginn and bassist Joseph Noval plug in, Mike Vallelly says “check” into the mic, and off they go, straight into it. There was no fanfare or grand entrance. There was no “We’re Black Flag and we’re back!” huzzahs followed by a bunch of cheers and whoops and yelps and “No! Really?” There were no “hello’s” or “good to see ya’s” or “fuck, has it really been 35 years?”. There were just four guys getting their gear ready and then blasting straight into it.

And when they do blast into it, the room changes shape. There’s a distinct energy that immediately fills the venue that’s fuelled by over 40 years of punk rock rage played out on stages across the world’s dingiest venues and it hits the crowd hard. And for about 70 or so minutes, the crowd enthusiastically takes every single punch. Mike Vallely – who replaced Ron Reyes on stage in 2013 when he sacked him – fronts the band as if he was there from the very beginning, sparing no time for between song banter and focussing all his energy on delivering the songs. Newbies Gil and Noval are tight, getting their heads down and digging deep for an explosive performance. And Greg Ginn, well, he’s Greg Ginn doing what Greg Ginn does: playing guitar for Black Flag, slamming through the riffs and driving the songs.

‘White Minority’, ‘Police Story’, ‘Bastard in Love’, ‘Can’t Decide’, ‘TV Party’ and more make up the set that closes with the classic ‘Rise Above’ and a bit of a jam on ‘Louie Louie’. And then what do they do? Line up at the front of the stage, raise their linked hands and bow to their worshipping fans? Nope. They pack their gear away while the crowd slowly realises their calls for more are to go unanswered and so make their way either to the merch stand or out into the Birmingham night. That is except for that guy, y’know, the one who shouts, “Where’s Rollins?”, yep, he was there tonight. He must have blacked out in 1986 or something and woke up just as the tickets went on sale. I didn’t have the heart to tell him. The shock would likely have killed him… 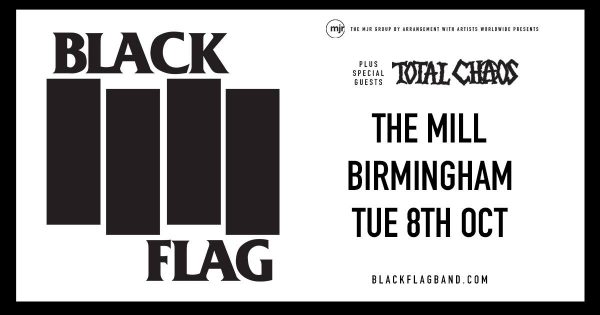