Some seven years since they made their live debut here at Civic Hall, Black Country Communion returned to their spiritual home with a two hour plus show that blew away any lingering New Year’s Eve hangovers and only served to enhance their reputation as a stellar live band. After BCC went on indefinite hiatus a few years back the announcement that the quartet of Glenn Hughes, Joe Bonamassa, Jason Bonham and Derek Sherinian had reunited for BCC IV and live shows in Wolverhampton and London was welcome news indeed. And the expectant crowd were rewarded with what was surely one of the most explosive gigs that the decades old venue has ever seen. 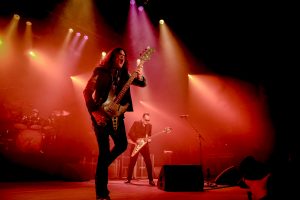 Hitting the stage with ‘Sway’ it is immediately evident that the band are all playing with a frantic energy and the pace rarely lets up throughout. Furious riffing from Bonamassa, thick grooves from Bonham and Hughes and Sherinian’s driving Hammond are completed by The Voice of Rock which is sounding stronger than ever. There is an undeniable synergy between the four that really is the very definition of the word Supergroup. ‘One Last Soul’ and the eight minute ‘Wanderlust’ follow before Bonamassa steps up to the mic for the first time with a glorious ‘Song of Yesterday’. As is his way Hughes between song words are full of passion and emotion for both his fellow band mates and the crowd and its clear how much it means to him to be performing with BCC again. 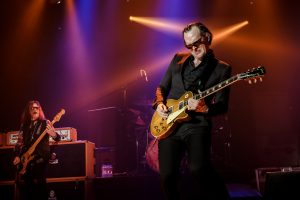 The setlist encompasses all four of BCC’s studio albums to date and incudes a rousing ‘The Outsider’, thunderous ‘The Battle for Hadrian’s Wall’ and Bonamassa’s Celtic flavoured ‘The Last Song for My Resting Place’, complete with the Dubliners Gerry O’Connor on fiddle and mandolin, which would have been the highlight of the night were it not for what was to follow in the encore. After closing the set with the call to arms of ‘Black Country’, BCC return for ‘Collide’ and ‘Faithless’ before Hughes announces they will perform a blues rock song from the 1970’s. Many may have been anticipating ‘Burn’ but Bonamassa’s scorching guitar heralds the introduction of ‘Mistreated’ and what follows is a scintillating version of the timeless classic with Hughes voice terrific throughout. 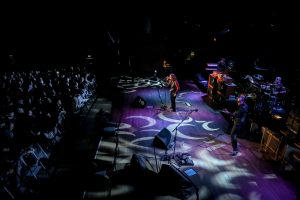 By only playing a small number of shows BCC not only ensure demand will always exceed supply but also those that are fortunate to witness them are treated to a very special event; much more than simply “just another gig” and instead a celebration of their individual and combined talents. A stunning show from start to finish.

This Is Your Time

The Battle for Hadrian’s Wall

The Last Song for My Resting Place

Man In the Middle 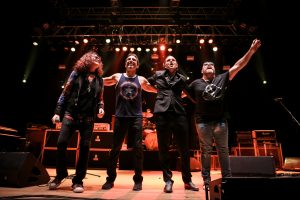