Ok, let’s get straight into this. The Rev. Billy F Gibbons, having released his Afro-Cuban themed ‘Perfectamundo’ back in 2015, now takes us back to his other touchstone with ‘The Big Bad Blues’. It’s Billy Gibbons playing the blues, what’s not to love?

This album of 7 bluesy originals and 4 covers is about as good as it get for lovers of things with a hue of blue. Ambrosia for the soul, manna from Heaven…you get the idea. This is good. Scratch that, it’s goooooood. We ain’t reinventing any wheels here folks but this is as cool as F…Billy F, and he’s pretty damn frosty.

‘Missin’ Yo’ Kissin’ let’s you know what to expect. That sleazy, badass growl and, even more importantly, THAT big, fat, full, filthy BFG sound. A lot of tone, a Godlike touch, a faultless cool radar, and a liberal dash of distortion, and he’s rarely done it better. You’d have to go back to 1999’s criminally overlooked ‘Rhythmeen’ to find him playing this well.

Oh yeah, ‘Missin’ Yo’ Kissin’…it’s over amped John Lee Hooker boogie is pretty much ‘La Grange’ but who cares. We then roll into the 12 bar boogie of ‘My Baby She Rocks’. That tone is there again! Curvy, crystal clear yet full of Mississippi mud. Guitar and harmonica circle each other like junkyard dogs over a huge, grubby, rumbling bass. But groove is all. It’s all about the groove. If this album’s about anything, it’s groove. Groove, you could say with a fair degree of certainty, was high on Gibbon’s list of priorities here. Groove.

‘Standing Around Crying’ is the first cover version and it does Muddy proud. It’s lazily effortless, laid back, sleepy and borderline pornographic, Gibbons vying with Dr.John for the title of rocks seediest voice. A good bottle of whisky is essential for this shit. Have mercy.

We pimpwalk into a brace of songs so elegantly wasted that they’re almost comatose. Bo Diddley’s ‘Bring It To Jerome’ invents a new sound…Heavy Diddley. It’s the soundtrack to the coolest film never made. Crunching rock but with a loose hipped swagger. As Mr. Richards says, rock without roll ain’t nothin’ and boy, can Gibbons roll! The ensuing solo also show’s that he was paying attention when he recently toured with Jeff Beck. You CAN teach an old dog new tricks…or then maybe BFG knew them first!

This stuff isn’t hurrying for no-one, buddy. ‘That’s What She Said’ manages to somehow move even slower than it feels it should and by ‘Mo’ Slower Blues’ we’re positively crawling, stopping for a way cool solo with a dash of Hendrix distortion.

The pace then picks up for an Elmore James romp. Sleazy to the nth degree, you wanna hang out with it but you know you’d hate yourself in the morning. We finish with a flourish, a 3 minute blast through ‘Rollin’ And Tumblin’ (everyone who’s anyone has played this you say? Fuck you, this version’s better) with a solo that’s pure “hot sauce”, and Bo Diddley’s ‘Crackin’ Up’ – playful and, yes, cool, with woozy backing vocals, a slight Latin touch and oodles of punk attitude.

Perfectly paced, played and produced, it’s the blues album of the year so far. You feel like you’re going to OD on it, it’s impossible to be this cool for this long…unless you’re the Rev. By revisiting his influences with these two albums he sounds rejuvenated and recharged. Free from the expectation of writing for the behemoth that is ZZ Top, he’s produced his best work in years. The dude is back.

A back-to-your-roots blues album can be a cop out for the creatively stifled and this should have been oh-too-easy exercise for Gibbons but he’s done it so damn well, it’s a flawless joy from start to finish. Worth the price of admission for that tone alone, it’s an album that sounds like it’s coming from inside a roadhouse strip club. And I can think of no higher praise than that. 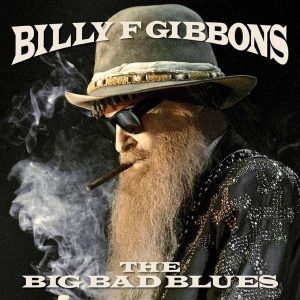