The Bard of Barking is back with the snappily titled ‘The Million Things That Never Happened’, his tenth studio album, described by the man himself as “the first pandemic blues album of our times”. It’s a bold claim, a perfunctory browse through some of our recent album reviews will show that there’s been a lot of music written during and about the last 20 or so months on our small planet but, hey, let’s jump in and take a look.

Produced by Romeo Stodart of The Magic Numbers, this sees Billy ploughing the same mellow Country Blues furrow that he has enjoyed of late, particularly recalling the brilliant albums he recorded with Wilco. Indeed, Stodart adds a dash of his own band’s rustic warmth to the proceedings. The performances, all round, are a joy, warm, relaxed, and quietly confident.

This is also, possibly, Bragg’s most personal, least political album. But fear not, Billy still has his say. ‘Mid Century Modern’ (see above) sees Bragg taking stock of his place in the world, as an ageing activist. A lot has happened out in the world since ‘Tooth & Nail’, his last studio album, back in 2013 and Bragg is savvy enough to realise that he doesn’t know it all, life is a constant learning curve, it’s all too easy to get complacent – “the kids that tear the statues down, they challenge me to see, the gap between the man I am and the man I wanna be”.

Bragg also looks across the pond a few times and gives us his state of the nation address. ‘Freedom Doesn’t Come For Free’ is a fiddle and banjo led hoedown, a good ole’ Country song that warns us that utopia comes at a price, urges us to stay alert while ‘The Buck Doesn’t Stop Here No More’ reminds us that the Americans “took pride in their democracy” and, again, warns us to “never trust a man who would be king” – a sentiment that applies equally to us over here right now.

Bragg’s rumination’s on the pandemic and it’s resulting lockdowns are glorious. He deals with the depression (“I’m drifting on the tide but there’s a storm raging inside”), the isolation, the self-reflection (“I’m searching for what’s true”), the boredom. Several of the songs could be examining isolation or depression, or both…interconnected. “The days blur into one, I just can’t seem to get anything done”.

The title track ponders all the things we hadn’t been able to do, love, life, birth, death, all set to an acoustic lament. It’s heartbreakingly gorgeous and all delivered with Bragg’s gracefully maturing Essex via Memphis voice. And then, unbidden, we chance upon moments in the sun – backed simply by an acoustic guitar and a piano, Billy reminds us that some days are just, inexplicably, golden and rarely has this feeling, for me, been better expressed in music, it’s three minutes of potted joy, a song that really should be prescribed by the NHS as a karmic salve.

And there are also love songs. Gentle, stripped back, universal. Remembering the living and the dead. Unflinching, heartbreaking yet affirmative, if these don’t strike a chord then you may well need a soul transplant. Indeed, Bragg himself has described the achingly beautiful ‘I Will Be Your Shield’ as the emotional heart of the album.

We finish with the album’s only co-write. Written with his son, Jack Valero, ‘Ten Mysterious Photos That Can’t Be Explained’ is classic Billy Bragg – whipsmart, bolshy and devoid of any bullshit. It examines the pitfalls of the internet, the perils of disappearing down pointless random online wormholes. It’s funny, angry, rueful and resigned – “common sense, like art, is in the eye of the beholder”. Too much information can be a bad thing.

And we’re done. As previously mentioned, there’s been a lot written about the upheavals of the past almost two years but this, this is the one that nails it. This is THE pandemic blues album. Painted in Autumnal hues, it captures the kaleidoscope of emotions we’ve all gone through and delivered it in the same comforting, gentle hug of classy Americana that seems to be a balm for his contemporary, Elvis Costello, of late. Mature, intelligent and beautiful in a way that might just stop you in your tracks, Mr. Bragg may have produced the album of the years. Cheers Bill. 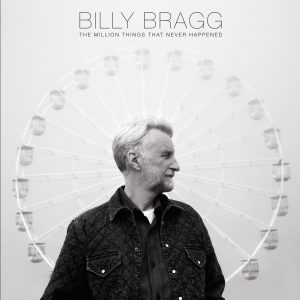