As a founding member of prog rock legends Yes, it’s no overstatement to say that Bill Bruford changed the course of popular music. Over four decades Bill played with some of the biggest names in rock music and it’s a rollcall that, even to a musicologist, can seem a tad daunting. Assembling songs from key points in his career Making A Song And Dance: A Complete Career Collection is a six disc set that charts the evolution of one of rock’s most innovative and respected drummers.

Disc One & Disc Two – The Collaborator

By the time Yes released their third album in 1971 they’d really hit their stride and it’s a track from that record which opens this collection. There was a tension simmering beneath Yes’ calm exterior, an argumentative nature, which forced Bruford to become an assertive player and ‘I’ve Seen All Good People’ found him centre stage and hitting the skins particularly hard. On the first five Yes albums Bruford changed the nature of the drums, from a background instrument that provided the beat to one that dictated it, and music would never be the same. However, there was definitely two sides to Bruford’s playing; like all good musicians he understood that sometimes it’s not what you play but what you don’t, it’s a light and shade with spaces which allow the listener to infer meaning. Bill’s first writing credit ‘Heart Of The Sunrise’ (from ‘71’s Fragile) is punctuated by huge white gaps and the dynamic between loud and quiet is quite startling and it’s a trick many wouldn’t think to employ.

Initially influenced by the likes of Art Blakey and Max Roach there’s a definite jazz sensibility to Bruford’s drumming, not so much a freeform sensitivity but an adaptive quality. That was derived from performing with Yes bassist Chris Squire who played in the high register which Bruford compensated for by developing unorthodox time signatures and it was a style that served him well in his time with progressive rock legends King Crimson. Bill had two tenures in King Crimson and disc two is culled from his second spell in the band and while King Crimson could certainly smoke the amps in a studio it was often overshadowed by their explosive live performances as renditions of ‘Three Of A Perfect Pair’ (from Absent Lovers) and ‘Elephant Talk’ (from On Broadway) attest.

As leader of the Earthworks jazz ensemble Bill Bruford had a role similar to his beloved Art Blakey; he  was a bandleader who nurtured young musicians and gave them exposure before they became well known in their own right. Django Bates, saxophonist Iain Ballamy and Gwilym Simcock are just a few of the members who passed through Earthworks hallowed ranks and it found Bruford veering away from rock and moving more towards jazz. Less reliant on rock cliches this project was a more intimate, dare I say, collaborative listening experience and was one that stood in marked contrast to the feedback drenched, needles-in-the-red King Crimson. However, what unites both eras is a sense of invention and those neat time changes are ever-present, albeit they’re far smoother and almost seamless now that Bill is in command.

Although Bruford has a more influential, central role with Earthworks he still knows when to take a back seat and bring other instruments to the fore. This is progressive music in its purest definition, and you get the feeling that it could fracture in any (and most probably, unexpected) direction. ‘My Heart Declares A Holiday’ has an African beat that conjures images of dusty plains, ‘The Sound Of Surprise’ mixes samba with oriental sounds while ‘Temple Of The Winds’ could have easily have come from Miles Davis’ masterpiece Bitches Brew. Earthworks put their own spin on several cover versions, most notably ‘Downtown’, yet they’re all deconstructed and reassembled in new forms. These two discs are the sound of an artist ploughing his own furrow and with little regard for prevailing commercial trends…and be thankful for that.

Spanning a period of 34 years this fifth disc finds Bruford in a host of different situations and playing with an array of different artists. I’m sure that for a man of Bill’s talents it wasn’t too hard adapting his style at the behest of a bandleader but to play in those situations with real conviction is the tricky part. Opening with a blast of high-octane rock n’ roll (courtesy of Roy Harper) this disc finds Bruford in chameleon mode and tackling everything from progressive rock to big band swing. The tracks recorded during the ‘80s haven’t aged that well, mainly due to the production, but it’s great to hear Bill reunited with his old Yes compatriots Squire and Howe. However, it’s testament to Bill’s ability that this disc (with one or two exceptions) doesn’t sparkle with invention like the previous sets.

Those who enjoy music with (more than) an air of spontaneity with revel in this final set. The pieces with pianist Partick Moraz are like abstract paintings with notes hanging starkly against a white canvas. All the tracks here are improvised and they display a certain magic that only comes from these situations. Case in point being King Crimson’s ‘No Warning’, a track that’s akin to a microphone lowered into the depths of hades you can almost visualise the band pushing each other to new limits. Bruford’s playing on ‘Split Seconds’ ensures it swirls like the mists of time while his collaboration with Michiel Borstlap (’16 Kingdoms Of The 5 Barbarians’) is simply spellbinding. As an artist always looking for ways to push boundaries it’s no surprise that closing track, ‘Kinship’, should ring out with Stockhausen overtones.

It’s often said that guitarists have a signature sound, but I think the same can be said for Bill Bruford. As this collection shows he’s far from a one trick pony and whether playing hard rock or jazz, when you hear those skins being beat you know it can only be Bruford, which is perhaps the greatest compliment you can pay a musician. 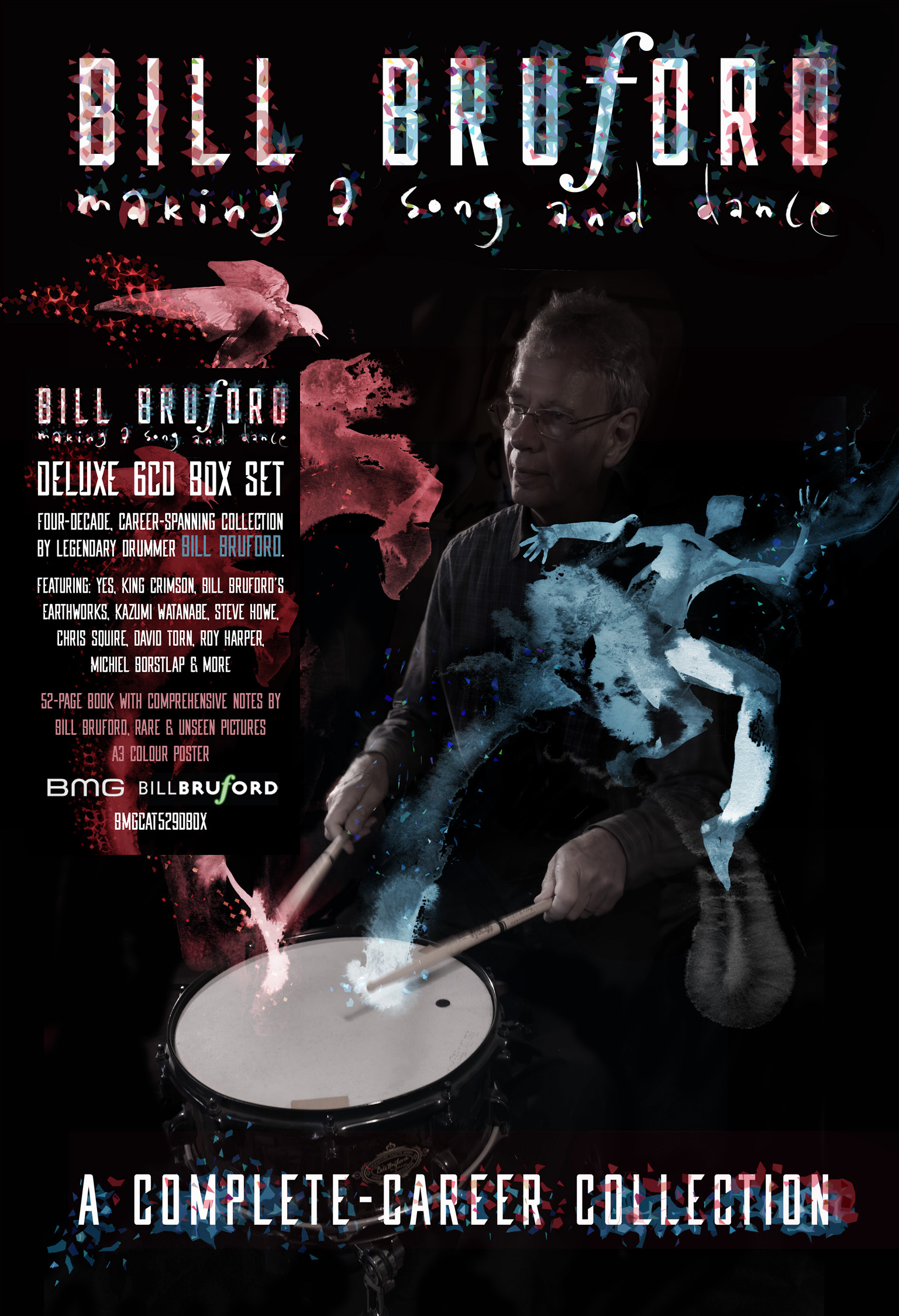