Promotional blurb can be a strange thing to navigate. Sometimes it’s lackluster, sometimes it’s totally OTT hyperbole, sometimes it’s written in another language and run (badly) through Google Translate and sometimes it gives you completely the wrong idea about what it is you’re about to listen to.

Take Big Muff 68 for example…and a good example at that as I’m about to review their debut album. I’d taken the promotional stuff with a fairly large pinch of salt – apparently founder members Henry Gibson and, erm, Ron Dongery met in Bangkok while getting suits fitted. They then decide to become male models in Norway and also decide to spread their love of three piece suits through the medium of swing metal. With me so far?

They then recruit the rest of the band, including Bass Frehley on, you guessed it, bass and 12-time Norwegian organ champion…Norge. The band, and indeed swing metal, is born.

So, the album itself. We kick off with ‘Everything’s OK’. There’s nary a trace of swing as we blast into a thundering heavy rock track, with a nice downtuned mid-song riff and a hint of Mike Patton to some of the vocals. The only hint of anything Glen Miller-esque are the female backing vocals.

The pace then drops for ‘Pain Still getting Stronger’, it’s acoustic intro leading us into a moody, autumnal ballad. There’s something of aa 90’s, alt-metal vibe here, with almost Korn levels of existential angst on display, although you wonder how much of it is genuine.

And on we continue with the heavy rock. ‘Watch My Back’ is a definite standout track, slightly grungy while maintaining a definite radio friendly sheen, it’s a classy, catchy, melodic rock song. ‘I’m Holding On’ ends with a curious conversation (in Norwegian) which ends with a chilling childs scream while the woody, twisting riffage of ‘It’s Over’ is another roof-raiser.

There are a few deviations from the template. ‘Home’ is another highlight, it’s acoustic opening heads into a mellow 90’s alt shuffle. The electric guitars make an entrance halfway through, recalling the best of bands such as Blind Melon while ‘I Found Out’ is powerful heart-on-sleeve stuff – a lone voice and guitar give way to a final, powerful full band finale.

We end with ‘Crack Open’ which, finally, gives us a glimpse of what the promo article hinted at in terms of the bands sound. A quirky, heavy, keyboard, laced riff is beguilingly weird while Gibson again runs through the Mike Patton vocal textbook before free jazz horns make an appearance. The song eventually winds down to a stop before picking up again for an atonal noise fest followed by a drum solo and some background studio chatter. This, this is what I was expecting to hear. Still no swing though.

What you do get, however, is a well performed and produced homage to the best that the alternative 90’s music scene had to offer – given a few modern days tweaks and flourishes. It’s an original, instantly likeable hard rock album and the band really didn’t need to go down the swing alleyway, they’re plenty good enough to make it on their own, gimmick free.

Released on 6 May 2022 by Mas-Kina Recordings 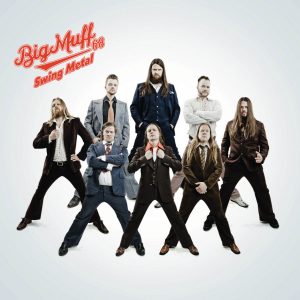