For whom the Bell Witch tolls…

Oh dear. This release from Bell Witch is a remarkable and riveting piece of work, almost painfully so. While doom bands invariably take pride in going the extra mile, and stretching things out to mind-bending proportions, Bell Witch have blown their contemporaries out of the water with this single track album release that stretches continuously across one hour and 24 minutes.

And while that is an achievement of sorts in itself, it barely begins to scratch the surface of the poignant and painful story that at least in some part lies behind Mirror Reaper. For those not yet to have their palms crossed by Bell Witch’s staggering compositions, it’s necessary to enlighten you. A two-piece from Seattle, Bell Witch were formed in 2010 and very quickly established themselves as formidable purveyors of funereal doom, in particular through their inspirational second album Four Phantoms (2015).

Soon after that release drummer Adrian Guerra left the band, Dylan Desmond (bass, vocals) then forming a union of minds with Jesse Shreibman, who took over on drums as well as being the source of additional vocals and organ contributions. Former singer Erik Moggridge (Aerial Ruin) has also made significant vocal contributions to the new record.

With Mirror Reaper a work in progress, Adrian died aged just 36, leaving his former Bell Witch colleagues bereft. In his memory some of his vocals that were unused on their previous album were engineered into Mirror Reaper by veteran producer Billy Anderson (Swans, Red House Painters, Sleep). While Mirror Reaper was always going to explore death and sorrow, the passing of Adrian, and his subsequent fleeting appearance on this record, have certainly added more gravitas and depth, were indeed it ever required.

As with previous Bell Witch recordings, Mirror Reaper is a sorrowful deathly lament that meanders at its own unabridged pace, during which every riff and beat of the drum is given freedom to arrive, awaken and fade again. So slow as to be borderline still, the holistic work is like a pebble tossed into a pond. But with that you usually get a few ripples in the water for your trouble. Mirror Reaper doesn’t even grant you that level of satisfaction. It’s one ripple territory, very occasionally when storm clouds threaten two. And that’s it. 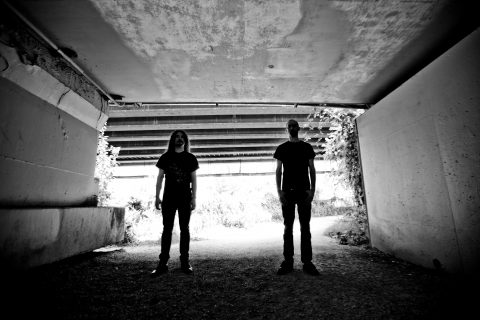 Yes really, through the entire 84 minutes the hypnotising sonic clouds, threaten to burst, but never really do. This is monolithic epic doom on a scale of such grandeur as to be almost unpalatable. With the added emotive injection subsequently delivered by the news of a death, makes this majestic lip trembling offering one of the standout moments within doom circles this year. For while the heaviness is draining both physically and more importantly emotionally, the flickers of shimmering light add a magical kaleidoscopic sheen in all the right places.

Vocally, the sound is thin, in the main indecipherable and yet compelling with it. At around the 25-minute mark there is a period of contemplation where the vocals take on the depth and delivery of a monastic choir, reverberating around empty catacombs. This in turn is followed by the bestial growls that give Bell Witch their unnerving qualities, fuzzed guitars ripping through the clouds in acknowledgement of one of the more dynamic detours within this immense journey.

By the halfway point of this monolithic marathon some fatigue starts to set in, breathing becoming uneasy, as the rolls of heavy riffage, haunting vocal groans and shimmering fragments of light start to tear into the fabric of your being. Some clean vocals at 52 minutes signal another stunning punctuation point within this overall journey of desperation and despair. After an exhaustive melancholic expanse that reaches out to the distant musical horizon, the guitars crash in at 70 minutes as the darkness descends to near overwhelmingly proportions.

The band will be playing Mirror Reaper in full at Roadburn next year and a full length video has been produced by Taylor Bednarz to provide additional visual accompaniment to this elephantine aural attack, a trailer for which is posted above. The film is a video collage comprised of dozens of archival clips and will also be shown as a standalone cinematic experience. Bell Witch plan to screen the video in the background when playing Mirror Reaper, although I have some misgivings about that, as anything that takes the eye off the ball in terms of the actual music is unfortunate.

A word of admiration too for sleeve artist Mariusz Lewandowski who has quite literally provided the framework for this album. Of course, this extraordinarily powerful opus is not for everyone. But for those prepared to devote 83 minutes of their lives to Mirror Reaper, allowing each of their senses to absorb its power, both good and bad, they will surely emerge a better person for it.