Two requirements for this album: commitment and patience…

London-based band Beautality describe their sound as “atmospheric black post metal” but to review this, their second album, we need to strip away the pointless labels and focus purely on the music – rock has too many sub genres which tend to over classify and constrict. So let’s avoid the risk of disappearing up our own pretensions and get back to basics. Which, incidentally, may have been good advice for Beautality (who are essentially a one-man band – creator, writer and multi-instrumentalist D.M. Ravengarde). ‘Einfallen’ originally began life as an EP but gradually transformed into this 2-act behemoth… But was that a wise decision?

To listen to this album requires commitment – and patience! Lead track ‘Einfallen’ is, at 13 minutes, the album’s shortest track and immediately sets the musical pace. This is (as is the band’s name) an iron fist in a velvet glove – its heaviness muffled by a flat production, overbearing sheen of keyboards and an incredibly monotonous pace. The whole album, by and large, moves at an identical speed. Sure, songs briefly speed up and slow down but they always faithfully return to the same sedentary canter. Although who knows, perhaps the feeling of oppression this creates is deliberate.

One 20-minute song after another cruises by inoffensively, leaving you thinking that a spot of judicial editing may have been prudent. The songs seem needlessly long, there’s not enough happening here to warrant their length, any chance of making short, sharp ponts being precluded. There is very little ebb or flow, no musical crescendos, making the story (apparently a tale of redemption) confusing and unclear.

Think of your favourite long song. Does it actually feel long or does it fly by in a heartbeat? These songs feel long! You watch the clock, counting the minutes, the seconds. There needed to be more variety and vitality here, shorter songs to break things up, to almost act as palate cleansers. Yes were a great band until “Tales From Topographic Oceans” – even Rick Wakeman hated that!

Pretention need not be a bad thing. It has led to artists stretching themselves and their art forms which in turn gave us creative moments of greatness but this, unfortunately, is the flip side – cold, repetitive and somewhat dull. Commitment given to an album needs to be repaid. Fans of doom and heavy prog may want to give this a listen but you probably won’t want to revisit it too often. 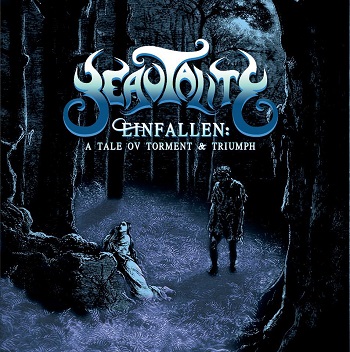