The Bay City Rollers didn’t quite live up to their “biggest group since the Beatles” tag, but “Scotland’s Tartan Teen Sensations” was a good fit. Probably now more remembered for the sheer exhuberance of their tartan finery (this was the 70s), it’s largely forgotten that they were a hugely successful, 120 million selling band who scored a string of Top Twenty singles and albums in the UK, the USA and Canada.

With Gold, Crimson Productions has crammed all the oldies but goldies from the band’s untouchable, 8 album, 5 year run into 3 cracking CDs.

The songs written by producers PhilCoulter & Bill Martin dominated the debut album, Rollin’ (1974). The hits, ‘Remember’, ‘Shangalang’, ‘Summerlove Sensation’ and ‘Saturday Night’ were graced with impossibly infectious singalong tunes, whose lyrics were rooted in sentimentality and nostalgia – sure fire winners in snaring the not-yet-mature teenage market.

The band’s own compositions were inclined to be outshone by the commerciality and sheer pop optimism of the Coulter/Martin stuff initially, but many critics, in retrospect at least, have nothing but praise for much of the self penned material. That recognition grew, from the derivative but surefooted Stuart “Woody” Wood/Eric Faulkner compositions, ‘My Teenage Heart’ and ‘Angel Baby’ on their second album, to the confidence and maturity of 1977’s ‘Another Rainy Day In New York City’ and ‘Don’t Let The Music Die’, two balladic, heart-string tugging songs that saw the band very successfully climb aboard the burgeoning late seventies AOR bandwagon.

Unlike the Fab Four’s stuff, BCR’s music was never placed on a pedestal by the likes of orchestra conducter Charles Hazlewood or by the late music critic and author, Ian MacDonald, but at minimum, the two bands shared a knack for picking high calibre, if relatively unknown cover versions to add to their own material. The Gentry’s ‘Keep On Dancing’ (their first ever single) and the Four Seasons’ ‘Bye Bye Baby’ were perfectly picked… two punchy, teen-angst anthems that stormed the UK charts in 1971 and ’75 respectively.

Apart from the obvious, what Gold tells you is that the band, Eric Faulkner, Stuart “Woody” Wood, Les McKeown and the Longmuir brothers, Alan and Derek, had clearly listened long, and listened hard to the popular music of the sixties in their formative years. They put what they learned into their songs. And so, ultimately, Gold speaks for itself. 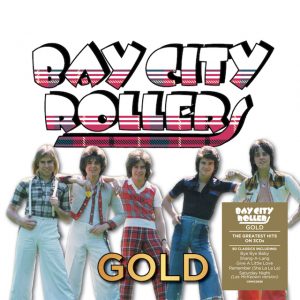