There were few sets as enthralling as Batushka’s at Bloodstock this year. The enigmatic Black Metal band from the east of Poland spent almost as long ritually anointing the stage and their impressive collection of assorted religious paraphernalia as actually performing.

Only once all the incense had wafted across the Sophie Lancaster Stage and out into the packed throng, and the multitude of candles had been meticulously lit, did Batushka eventually get down to the aural action – safe in the knowledge that the aesthetic side of things had well and truly been taken care of.

Batushka’s debut album Litourgiya was released to some jaw-dropping reviews in 2015 as the Black Metal fraternity welcomed something fresh and vivacious into their charred souls. New album Hospodi – which provided the beating black heart of what was a stunning Bloodstock set – is pulsing with mesmerising monastic chants and liturgical incisions.

Once ‘Wozglas’ has set the darkened tone perfectly with its doleful ambient chants, Batushka show that they have the bite to go with the bark in the storming ‘Dziewiatyj Czas’, complete with rousing unions of ‘Hallelujah’. This then merges into the crushing ‘Wieczernia’ which rumbles so deeply that you feel its very heart has been excavated by a miner. A mid-track roar from the gates of hell signals a monstrous pounding throb that is simply impossible not to bang your head in time with.

Unfortunately Hospodi is not all about the music alone however as anyone who has followed the band’s legal infighting will know. For the unfamiliar, Batushka perform in an array of ever increasingly flamboyant quasi-religious costumes that suggest they’ve had a good rummage through the store cupboards at the Vatican.

While this undoubtedly adds to their aura (well, it never did Slipknot any harm!) it also means that identities are essentially concealed when performing in front of their flock. So when the legal skies erupted around Hospodi following an internal bust-up most of us looking from the outside in were left to muse as to who did or wrote what and which member had left and so on.

It’s not really what any band would want just as they’re releasing an eagerly awaited sophomore album. The last thing the world of metal needs is yet another split along the lines of Entombed AD or ‘the real’ Mayhem.

So for now at least Hospodi must simply be seen as Batushka’s second full length work until they, or the Courts, tell us otherwise. It also goes without saying that none of this seemed to matter a single jot to the packed hordes who came to worship at the feet of the Polish powerhouse at Bloodstock.

In view of their smouldering incense that cast a hazy cloud across the Sophie Lancaster tent it may be something of an oxymoron to suggest that Batushka are a breath of fresh air to the occasionally insular Black Metal scene.

Some may see the collective as a gimmick, dressed up in gowns and crowns who spend more time attending to their waxworks than your average Madame Tussauds curator.
None of the religiously imagery would be worth a crucifix candle without the magical music that goes with it and Hospodi does not lack any of that. ‘Polunosznica’ opens with a brief cold lithurgic chant, supplemented by a medieval organ, which leads into a cascade of flowing rhythms before igniting into one of the angriest tracks on the album, the raw savagery of which is at times bordering animalistic.

Hospodi sees Batushka channel everything they’ve learned over the past four years into a deeply atmospheric album, one that combines old Byzantine sounds with more conventional modern metal song structures. Combined, the impact is at times devastating with the carnage of ‘Pierwyj Czas’ giving way to the more sombre ‘Tretij Czas’.

Closing with the haunting ‘Liturgiya’, Batushka wrap things up in style. Hopefully, two albums in, even brighter days beckon once the judiciary has had its say. 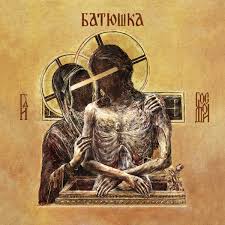